This conversion of a Victorian mansion near Ulverston has been done with rare care and attention to detail. James Fisher reports.

Estate agents aren’t generally known for under-playing the homes for sale on their books, but sometimes they come out with a really big statement which still demands that we sit up and pay special attention.

‘This is one of the finest country-house conversions we have seen in the north of England,’ says Jamie Adam of Savills. And despite the number of superb places we’ve come across in recent years, it’s hard not to see where he’s coming from with Stone Cross Mansion, a grand Victorian house in the Lake District that’s been transformed.

Stone Cross Mansion was originally built for the Kennedy family in 1874 and has been converted and refurbished into 19 two- and three-bedroom apartments ranging from £250,000 to £600,000.

Pictured on this page, as well as some of the highlights from the communal areas, is one of the latter: the 1794sq ft Wilfred Suite. 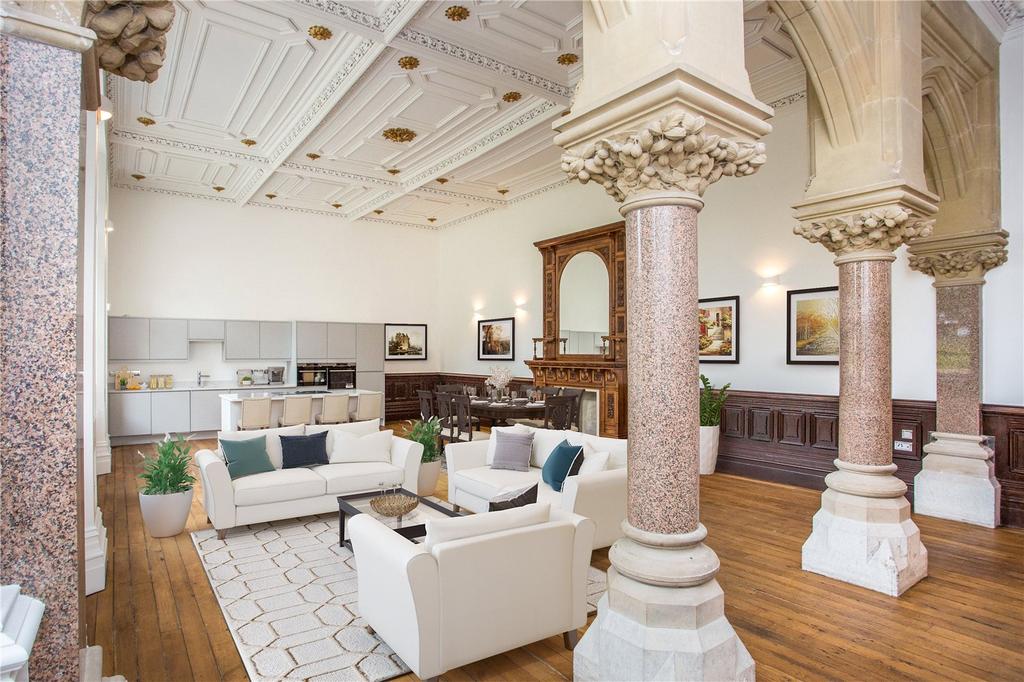 This flat has three bedrooms (one of which is en-suite) and an enormous living-dining-lounging area, adorned with marble columns, original plaster ceilings and a feature fireplace that is a reproduction created by craftsmen using photographs of the Victorian original.

The apartment opens up through windows double glazed but in the original style onto its own outdoor space.

The Wilfred Suite is accessed directly from the main hall, with its ‘Imperial Staircase’ featuring a triptych of paintings by Lucien Besche depicting Tennyson’s Sleeping Beauty, which were restored by a Harrogate-based specialist during the conversion work.

That much you’d gather from the pictures, but what you won’t see is the fact that they have installed state-of-the-art technology, such as SkyQ services and fibre-optic broadband, plus video-entry systems and intruder alarms.

Stone Cross Mansion is equally eye-catching on the outside, with landscaped gardens and tree-lined avenues complemented by views of Morecambe Bay and the Sir John Barrow Monument in the distance. The pretty market town of Ulverston is also nearby, with its cobbled streets, railway station and easy access to the main A590.

The apartments at Stone Cross Mansion are for sale via Savills — see more details and pictures.

The valley of the Marshaw Wyre in the Forest of Bowland, looking to Hawthornthwaite Fell. Credit: Alamy

A solitary dawn walk through the Forest of Bowland is a magical experience, says Fiona Reynolds.