Trending:
California Dreaming: the McCormick Estate comprises a 6,200sq ft Mediterranean-style house with six bedrooms, almost an acre of grounds and a pool, boasts one of the best views in LA. Credit: Sotheby's International Realty

Wild, wacky and wonderful in equal measure, Los Angeles has attracted some of the world's most discerning property buyers for decades. Holly Kirkwood found out why.

Home to mountains and desert, volcanoes and rainforests, ski slopes, beaches and more than 25 million acres of fertile farmland, California is one of the most diverse states in the USA.

It’s also the richest: its farming income is small potatoes compared with the profits generated by the twin global powerhouses of Silicon Valley and Hollywood. In fact, if California were a country, it would boast the fifth largest economy in the world, with a GDP of $3 trillion.

This economic clout goes hand in hand with a weighty cultural capital — California has a talent for kicking off huge global trends, from yoga to juicing, hiking, eating ‘clean and lean’ and, more recently, mindfulness. The lifestyle on offer here is enormously attractive and, as a result, the city at the centre of it all, Los Angeles, is fast becoming a hub for the global business fraternity.

‘My clients, who have homes all over the world, are extremely keen on looking after themselves, from eating fresh, organic food to staying fit and making sure their family is healthy as well — and this is just the lifestyle that LA offers in spades,’ explains Ed de Mallet Morgan of Knight Frank, who deals with global high-net-worth individuals.

David Parnes of Savills Associate The Agency has also noticed that the California lifestyle draws people from the American east coast and Europe. ‘It’s more relaxed here than New York or London — in LA, you can be who you want to be,’ he says. ‘You can eat, drink and party in some of the most glamorous venues in the world or live completely privately, all while conducting some serious business.’

According to Eric Lavey of Sotheby’s International Realty, LA is becoming a global business centre: ‘As tech and entertainment converge in a big way, online giants, including Google, Apple and Amazon, are investing heavily in the city. In addition, as Asia and Australia have become important players in the global economy, LA is perfectly placed. In terms of access, it’s just an 8–11-hour flight from anywhere, east or west.’

The South Bay Bicycle Trail, a path for walkers and cyclists along the coast to Venice Beach.

The city is also much more liveable now than it used to be, according to Knight Frank’s Jason Mansfield, who explains that residents no longer spend hours in their cars. ‘These days, you can find a neighbourhood you like and work, eat and shop there without having to travel at all,’ he explains. Mr Lavey concurs: ‘Nowadays, LA is a city full of villages — you just need to find the one that suits you.’

In terms of property, LA locals love their ‘white boxes’, which come with an open-plan layout and a Minimalist glass-and-chrome aesthetic. These houses have had some bad press, but the truth is that many of the latest new-builds provide a clever use of space with an indoor/outdoor footprint that perfectly suits the climate.

There are also character properties from the 20th century to be found, including houses designed by revered architects Wallace Neff and Paul Williams. Finding the right house is all about working with the right people.

‘A successful agent will move heaven and earth to find a buyer their perfect home,’ says Mr Lavey.

‘It’s important to understand that not all properties for sale are online; a huge number are bought and sold off-market on the phone, so buyers must find an agent who is well connected.’

Where you live in LA depends on which business you’re in. Entertainment people like to live downtown and often opt for the trendy Bird Streets, where contemporary properties offer ‘jetliner’ views of the city, or in Hancock Park, a gated community with large period houses set in their own landscaped grounds.

According to Mr Parnes, many of his lifestyle buyers from Europe choose areas such as Brentwood. ‘It’s the Hampstead of LA,’ he explains. ‘It’s peaceful and very pretty and there are great schools, restaurants and boutiques. It’s at the foot of the Santa Monica mountains and also close to the beach.’

New to the market in Brentwood, listed at $17.995 million (£14.48m), 13,151 Rivers Road offers more than 9,500sq ft of living space, with seven bedrooms and 10 bathrooms. Outside is a pool and lush landscaped gardens, plus more than three acres of private land — it’s for sale via The Agency/Hilton & Hyland. 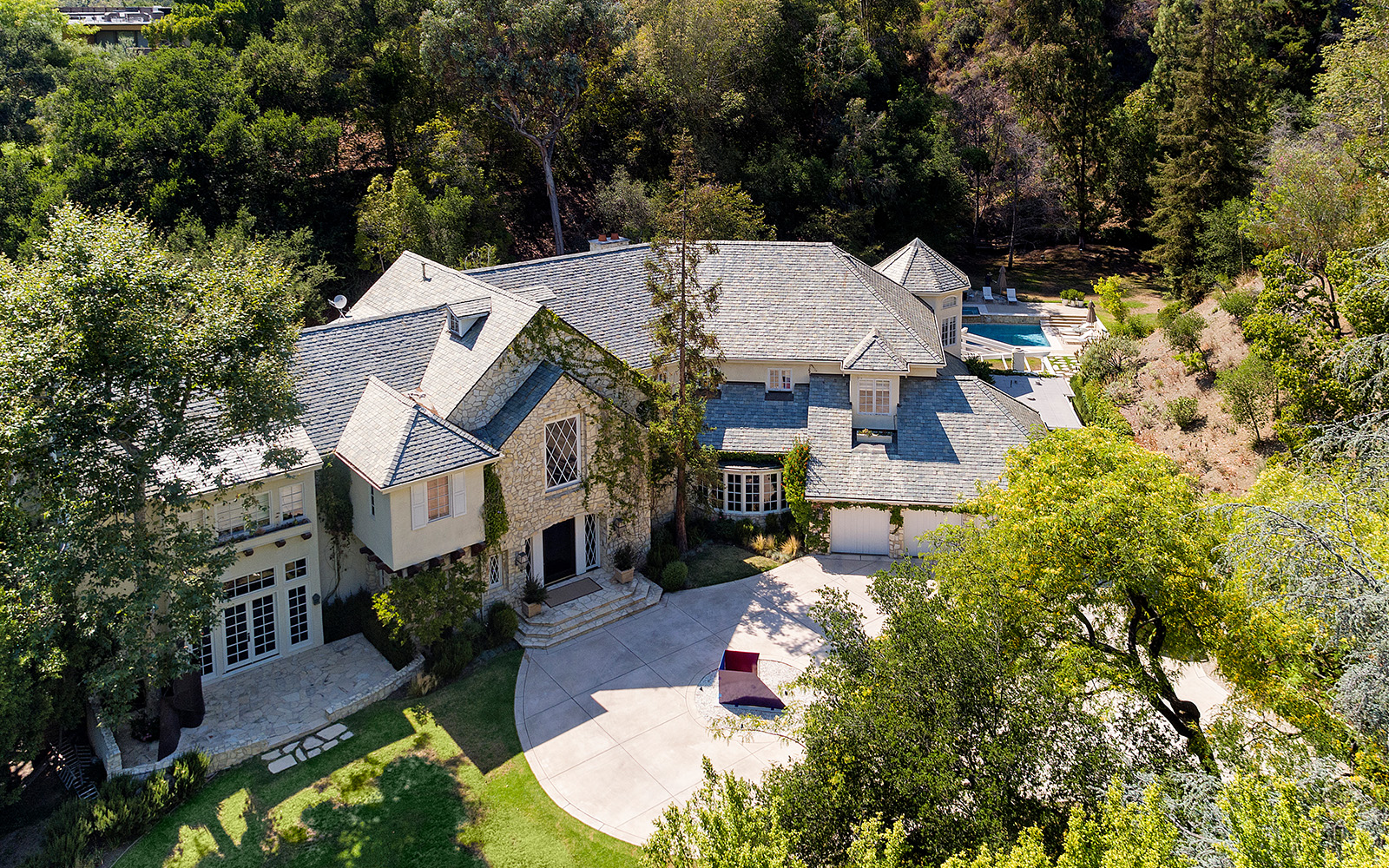 Also in demand from lifestyle buyers is the Pacific Palisades area, an enclave of large estates and high-end modern and period properties, which has more of a beachy feel. Residents love the striking greenery and ocean views and the fact they’re within easy reach of the city, but right by Santa Monica.

Five-bedroom houses start at $5 million (£4m), but climb quickly — the McCormick Estate (pictured at the top of this page) which comprises a 6,200sq ft Mediterranean-style house with six bedrooms, almost an acre of grounds and a pool, boasts one of the best views in the city ($27.5 million (£22m) through Sotheby’s International Realty.

For people who really relish beachside living, however, there’s really only one place to buy. ‘People love Malibu because it’s so close to everything, but it’s got that amazing beach vibe,’ explains Mr Mansfield. ‘The lifestyle here is all about relaxing down by the water. At weekends, the dinner-party scene is huge — people go out to great restaurants, but Malibu is all about entertaining at home.’

Property-wise, if you want to be on the water, it’s expensive — the smallest two-bedroom properties start at about $6 million (£4.8m) — but a lot of buyers like to be up in the hills, where you get more space and incredible ocean views.

Knight Frank is currently listing a two-bedroom waterside Malibu property with direct access to 40ft of private beach for $6.75 million (£5.4m, 020–7861 1199). It’s the sort of house that sums up the ultimate California lifestyle, according to Mr Mansfield.

‘It really doesn’t get better than this,’ he says. He probably has a point.

Lee Krasner's bold work is the subject of an exhibition at The Barbican. Lilias Wigan paid a visit, and focuses