Swinburne and Lord Tennyson are both connected to this fine country house, which has been renovated to include a stunning infinity pool overlooking the Oxfordshire countryside.

Walls have ears, but in the best traditions of the various aristocratic families who have owned it over the years, the timeless elevations of Holmwood at Binfield Heath, on a southern knoll of the Chilterns, four miles from Henley-on-Thames, keep their secrets well.

For sale through Savills at a guide price of £11.25 million, the distinguished Grade II-listed, Georgian country house, built in the early 1700s with 18th-century and later extensions, will appeal to like-minded UK or international buyers for whom privacy and tranquillity rank high on their property wishlist. 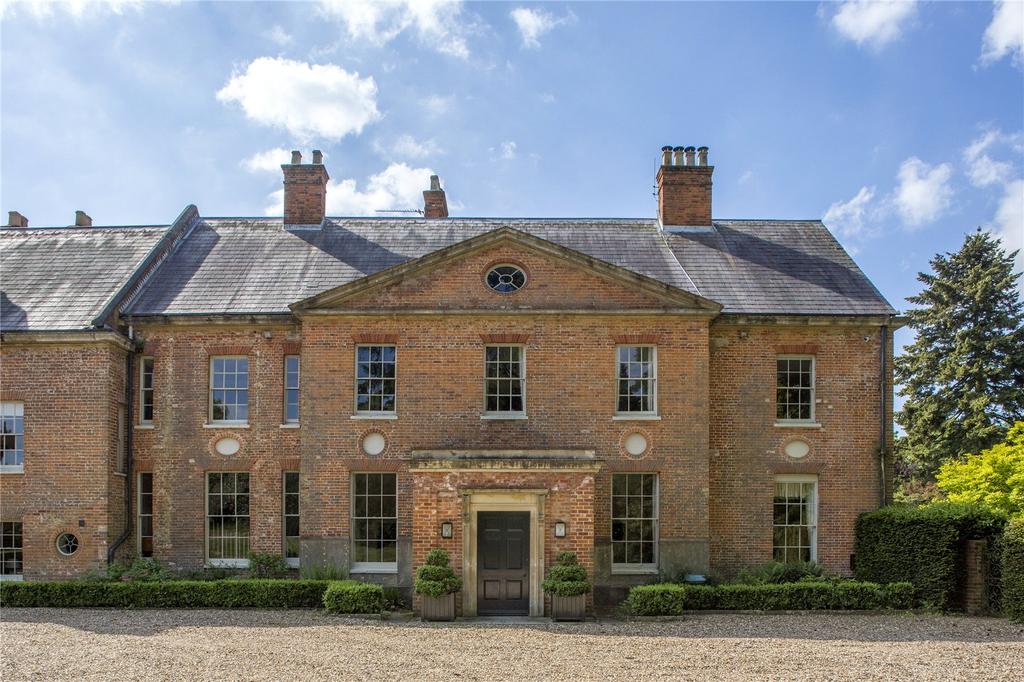 Holmwood stands on land once owned by the Stonor family of Stonor Park, staunch Catholics whose refusal to bow to Henry VIII’s Act of Supremacy forced the sale, by 1650, of all their estates – bar the Stonor valley – to pay recusancy fines.

Although exactly who built the original Holmwood may be unclear, an early owner was Vice-Admiral Lord Mark Robert Kerr, third son of the 5th Marquess of Lothian, and a brilliant naval officer much admired by Nelson.

In 1799, he married Charlotte, third daughter of the Marquess of Antrim, later Countess of Antrim. They had a large family, two of their sons succeeding as 4th and 5th Earls of Antrim. 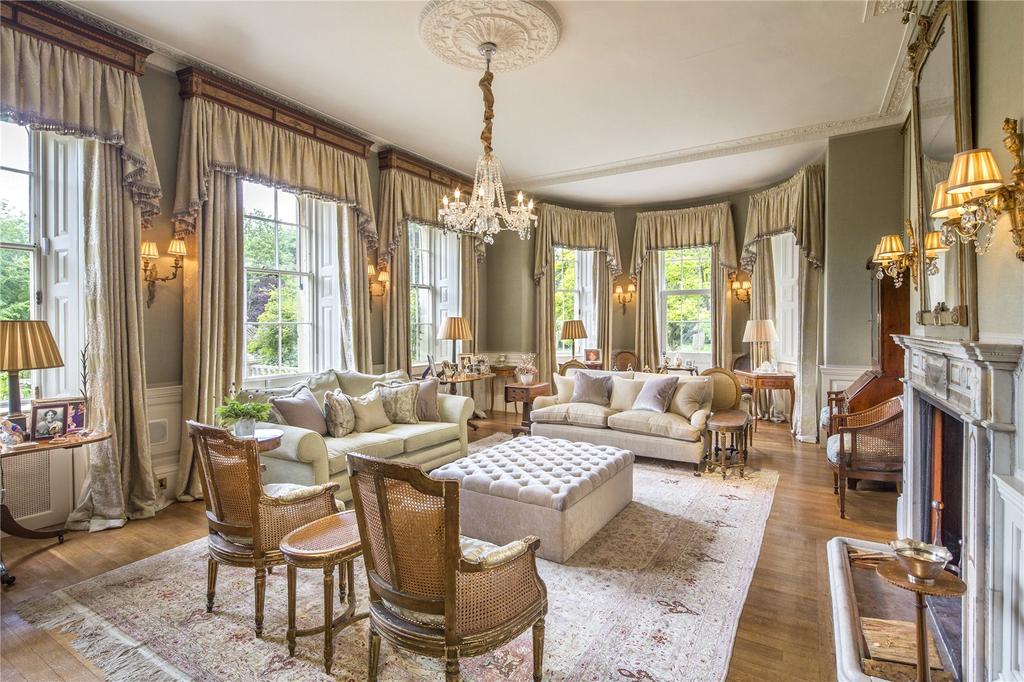 Holmwood remained in the hands of the Antrim family before being bought back in the early 1800s by the Stonor family, who re-entered public life following the passage of the Catholic Emancipation Act of 1829.

This quiet corner of south Oxfordshire became something of a Victorian ‘poet’s corner’ after 1850, when Alfred, Lord Tennyson finally married the love of his life, Emily Sellwood, at nearby Shiplake Parish Church – the same year that he published his celebrated In Memoriam and became Poet Laureate.

Emily was a cousin of Catherine Rawnsley, wife of the Rev Robert Rawnsley, vicar of Shiplake, and both she and Tennyson were regular visitors at their home. 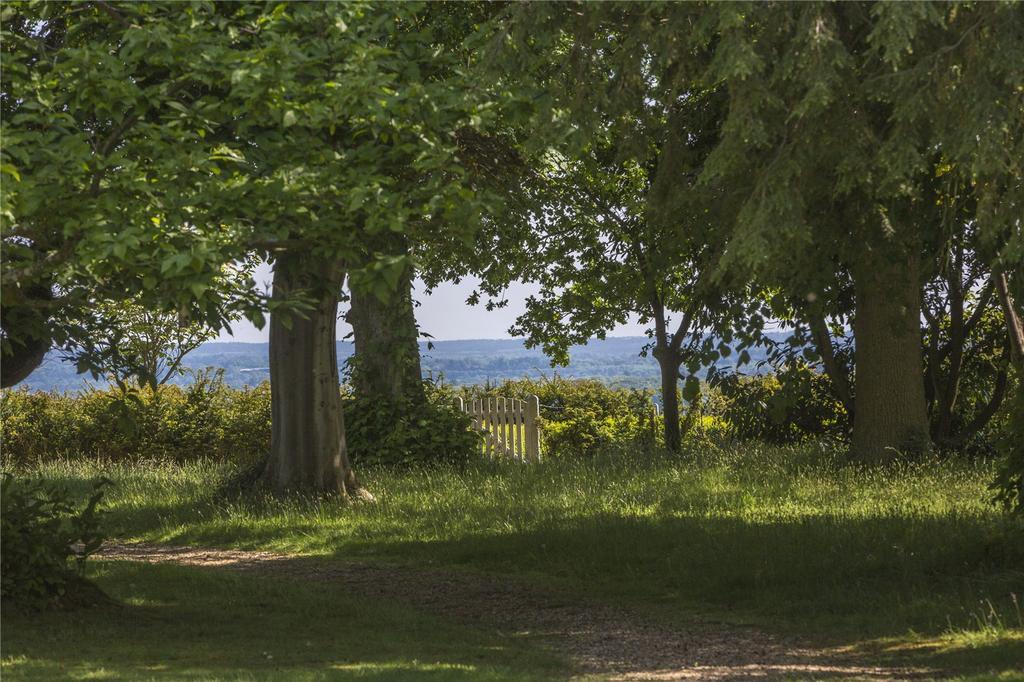 At that time, Holmwood was occupied by the feisty, 79-year-old Lady Stanley, who, according to local historian Emily Cleminson, was ‘much scandalised’ to learn that the bride and groom would be sleeping under the same roof on the night before the wedding and was determined to prevent this breach of etiquette.

The poet apparently being ‘too shy’ to leave the shelter of the vicarage, it is said that Lady Stanley carried the bride off to spend the night at Holmwood. 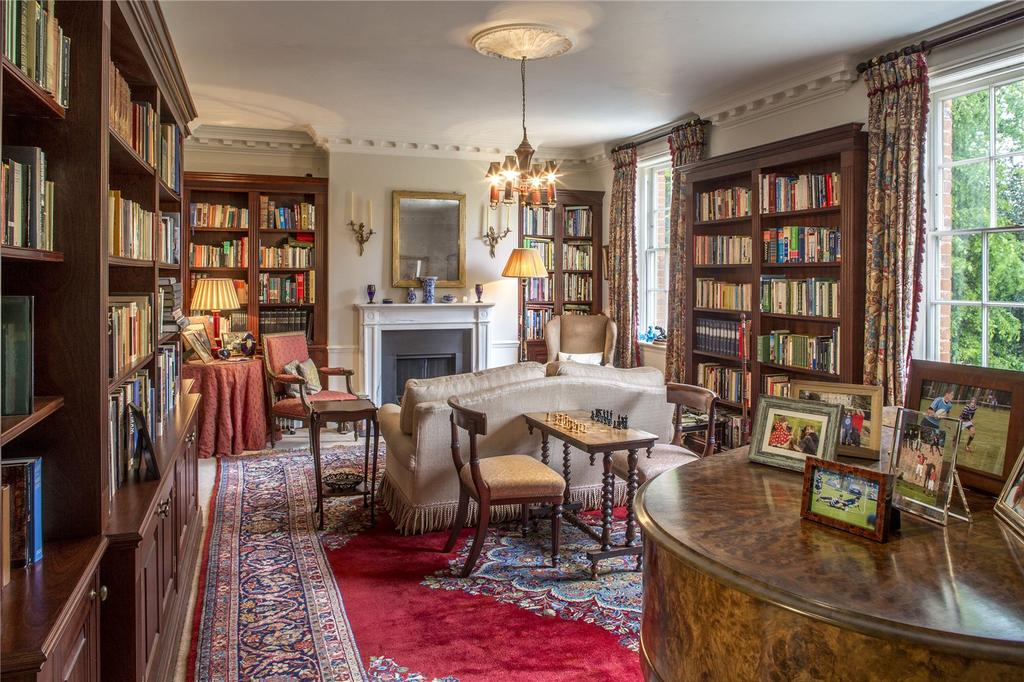 From then, until the Admiral’s death in 1877, Swinburne spent long periods at the house in regular attempts to recover from a life of debauchery in London. By coincidence, Audrey Boyle, the wife-to-be of Tennyson’s son, Hallam, was also a frequent visitor during the Swinburne family’s tenure. 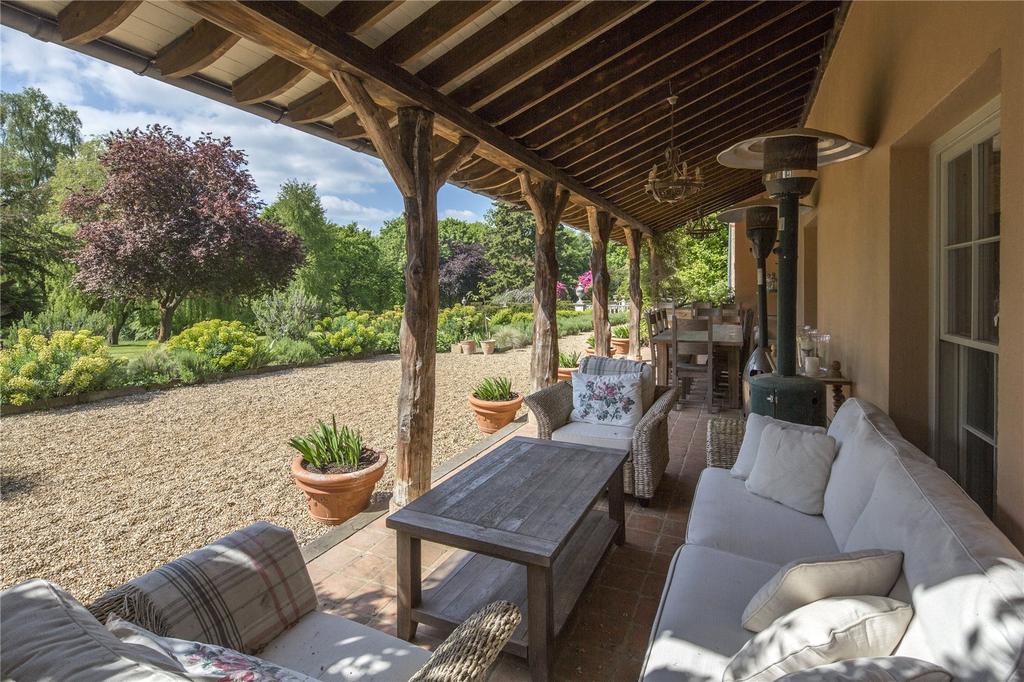 By contrast, the 20th century seems to have been a period of relative calm at Holmwood and selling agent Stephen Christie-Miller recalls that the house ‘hadn’t been touched in 30 years’ when the current owners, Lord and Lady Marks, bought the property 10 years ago.

Since then, the 14,200sq ft mansion, which boasts magnificent views over the Thames valley, has been impeccably reconfigured, together with its cottages and outbuildings, to provide the ultimate in elegant country living for the 21st century, as well as respecting the simplicity and fine proportions of its Georgian origins. 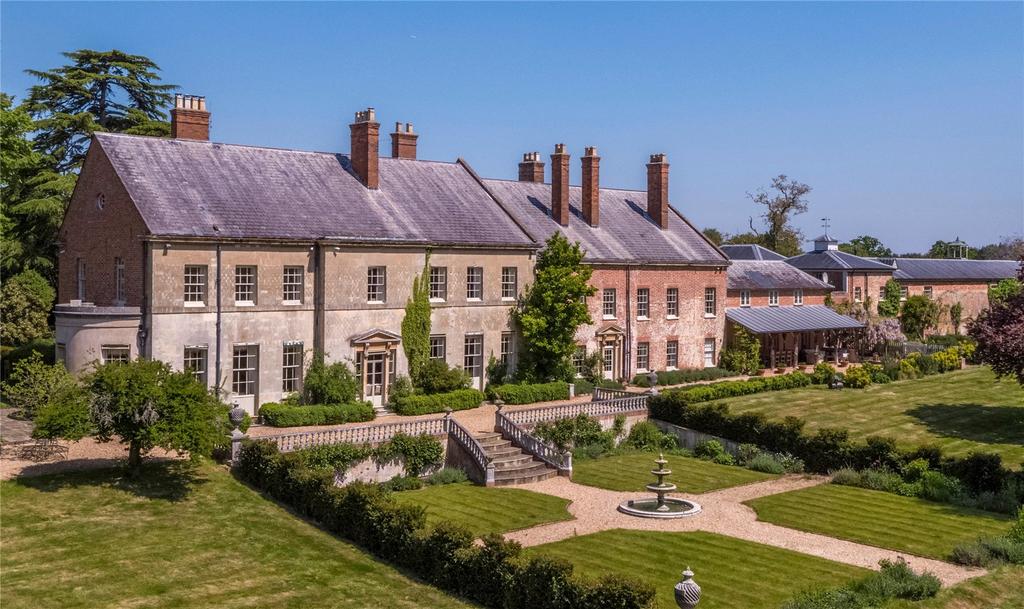 The owners were assisted in their endeavours by Peter Cave and Rory Duncan of Oxford-based architects Johnston Cave Associates.

Accommodation on three floors includes three fine reception rooms, including a light, double-aspect drawing room with a marble fireplace, large sash windows, a stylish curved extension and access to terraces to the south and west, which, together with the dining room, sitting room and the limestone-floored hall, make for an impressive main entertaining area. 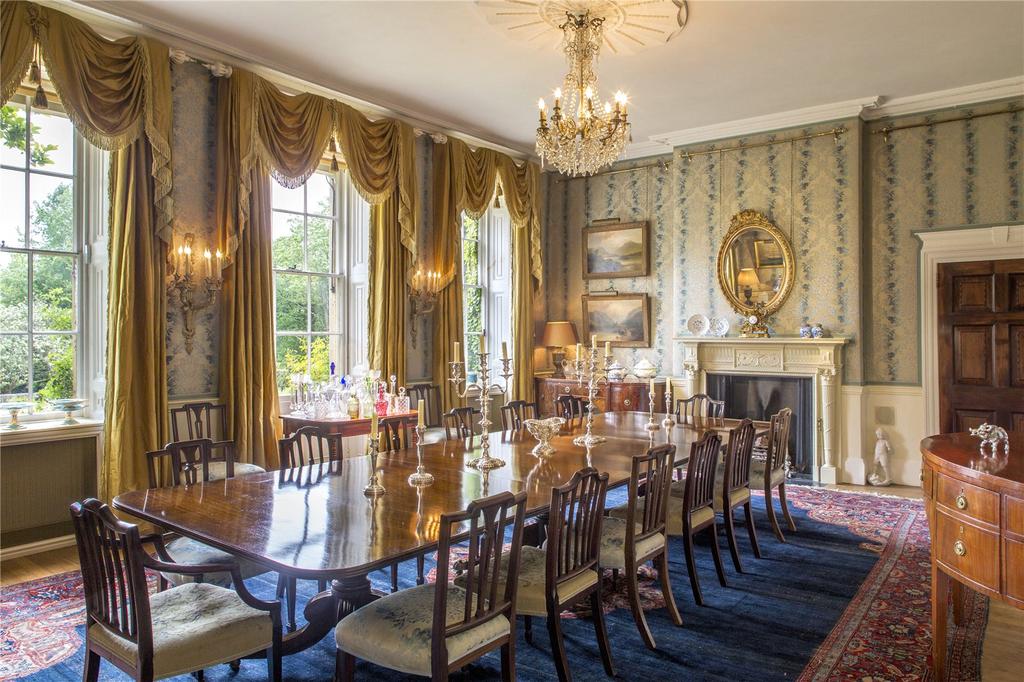 The first floor houses a library/music room, a gym/ballet room, a large home office and 11 bedrooms, each with its own bathroom – an extremely unusual feature for a listed property, the agents say – with a large cinema and attics on the second floor.

Three secondary houses, each with its own gated entrance and separate parking, provide additional guest or staff accommodation. 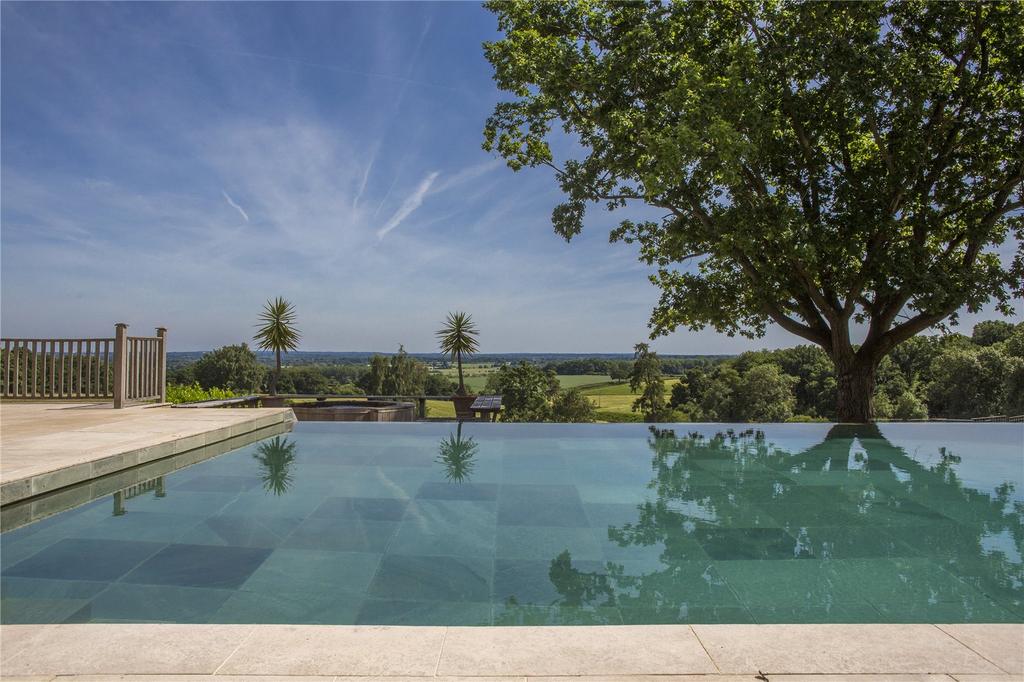 Holmwood’s 26 acres of spectacular gardens and grounds provide not only a splendid backdrop to the main house, but cater for the most popular sporting pursuits, with stabling and grazing for four horses, a sheltered all-weather tennis court and, the pièce de résistance, a magnificent, heated, infinity-edge swimming pool, perfectly positioned to make the most of the glorious southerly views.

After a rich history of family ownership, this country estate is ready to start a new chapter. Penny Churchill reports.

Vast estate in Carlow's horse country comes on sale for the first time in over 200 years.

One of the most beautiful properties in Sussex has come to the market this summer: the sublime Findon Place. Penny