One of the greatest houses in Britain has come to the market: Cothay Manor, in Somerset. Penny Churchill takes a look at this magnificent house, it’s equalling thrilling gardens, and traces its history.

This week sees the launch — at a guide price of ‘offers over £5 million’ through Knight Frank in Exeter — of Grade I-listed Cothay Manor and its magical gardens near Wellington, Somerset, described in October 1927 by Christopher Hussey of Country Life as ‘the most perfect small 15th-century country house that survives in the kingdom’.

Looking ‘as though it had been moulded by thick fingers out of the soil’, the manor sits behind its own fishpond among the meadows and woods of the Vale of Taunton, little more than five miles from junction 27 of the M5 motorway.

Hussey attributes Cothay’s survival as a rare, if not unique example of a largely unrestored and unaltered West Country manor of 15th-century type to ‘its concealment among the deep lanes that wind nowhere in particular from Wellington towards the Devon border’, and to the ‘lightness of healing touch’ of his friend Lt-Col Reginald Cooper, who bought Cothay in 1925, repaired the gatehouse, sympathetically restored the house and laid out the gardens. One of his more ambitious projects was to re-route the River Tone, which washes the western edge of the garden, to save his favourite pine trees from erosion.

His appraisal also underlines the bond shared by the English gardening elite of the 1920s and 1930s, who regularly exchanged ideas: ‘Colonel Reggie Cooper was a bachelor diplomat in the Country Life circle of Edward Hudson and Christopher Hussey. Cooper had been at the Istanbul embassy in 1914 with Harold Nicolson of Sissinghurst and Gerald Wellesley of Stratfield Saye, all friends of Hussey and of Hidcote’s Maj Lawrence Johnston. In the distant south, they dreamed of English manors, of old stone, rich wood, grey-green tapestries and flickering candles,’ a description that fits Cothay Manor like a well-worn gardening glove. 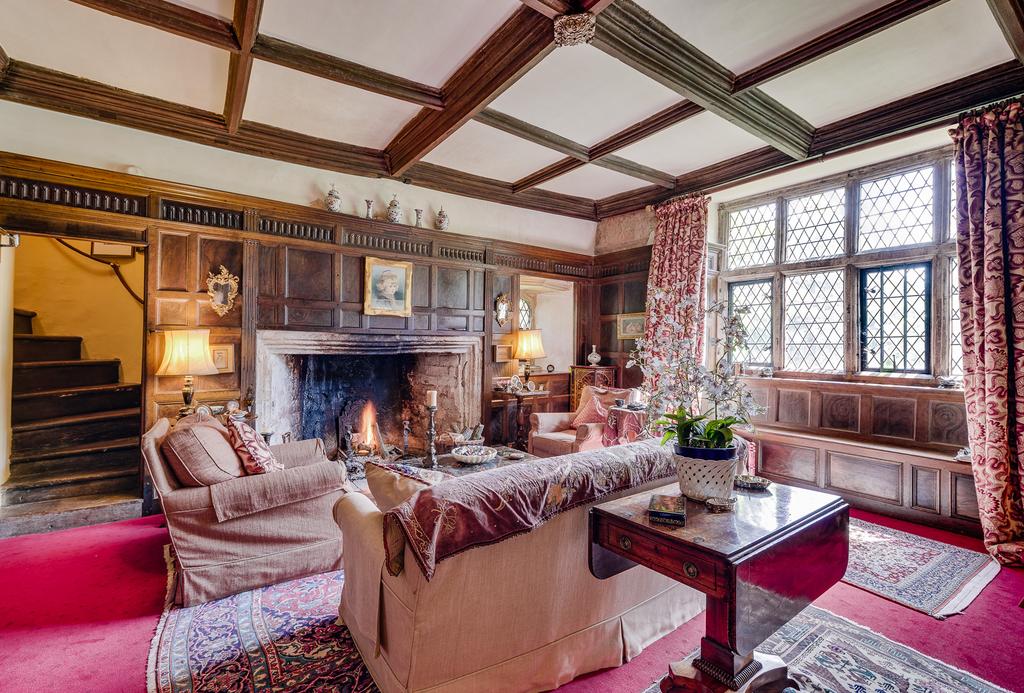 The house was built of the local sandstone in about 1480, on the site of an earlier hall-house by the Bluett family, who were lords of the manor of Holcombe Rogus in Devon and nearby Greenham Barton. In the late 1500s, it passed to the Every family. The original medieval plan comprised the gatehouse, an inner courtyard, a porch leading to a screens passage and the central Great Hall that, until the early 1600s, when William Every added the dining room, would have been the hub of household activity.

The dais end of the hall, where the high table was located, was panelled in oak at around the same time. Otherwise, the manor has remained structurally unaltered, apart from a handful of rooms added by Col Cooper and the north wing built by his successor, Sir Francis Cook.

The solar at the north end of the hall at Cothay Manor as it was in 1927, published in Country Life. ©Country Life Picture Library

Cothay remained with the Everys until 1877, when it was bought by a Mr Sweet, whose family sold it in turn to Col Cooper. In 12 short years, he transformed what had become a run-down farmhouse into a national treasure, before selling, in 1937, to Sir Francis Cook, who housed much of his famous art collection there during the Second World War.

Cothay’s next high-profile owner was the MP for Taunton, Edward du Cann, who was succeeded, in 1993, by its present chatelaine, the formidable Mary-Anne Robb, and her late husband, Alastair, by which time the historic house and its romantic gardens were again in need of renovation.

Driven by a shared passion for ancient buildings and classic English gardens, Mr and Mrs Robb embarked on a mission to reinstate the splendour of Cothay’s medieval buildings and the gardens laid out by Col Cooper as a series of ‘rooms’ around a 200-yard-long yew walk — a plan reminiscent of both Sissinghurst and Hidcote.

In the past, Cothay has even been dubbed ‘the Sissinghurst of the West Country’ although, as Mrs Robb points out, the gardens at Cothay date from 1925, those of Sissinghurst from 1932.

Soon after their arrival, the Robbs had the gardens at Cothay gutted and rebuilt around Cooper’s original framework. Still an ongoing project, it has seen the addition of new areas, including a bog garden created with giant stepping stones along the old river-course, a small arboretum with specimen trees, a wildflower meadow and a lake created as a backdrop to the gardens, the spoil from which was used to build a traditional 17th-century style mound that is now the final resting-place of its creator, Alastair Robb.

Gardening at this level is not for the faint-hearted, a sentiment expressed by Vita Sackville-West, of Sissinghurst, who said of her creation that it ‘broke my back, my finger-nails and sometimes my heart’. A sentiment perhaps echoed by Mrs Robb, as she and her enthusiastic team work tirelessly to maintain the gardens, grounds, meadow and waterways, some 40 acres in all.

In the first of a series of Country Life articles in November 2004 she revealed the effort involved in maintaining her signature Unicorn Walk, where thousands of tulips are planted under swathes of catmint to flower consecutively from May onwards: ‘In the first season a few years ago, we planted 2,500 White Triumphator bulbs throughout the garden, in groups of fives and threes, finishing with a grand slam of 2,000 more planted into long, narrow beds under an avenue of Robinia pseudoacacia Umbraculifera. Now, each November, I add 500 White Triumphator bulbs to the original planting scheme, for I love the way they appear to float through the garden, like an army of wingless angels heralding the lengthening days.’ 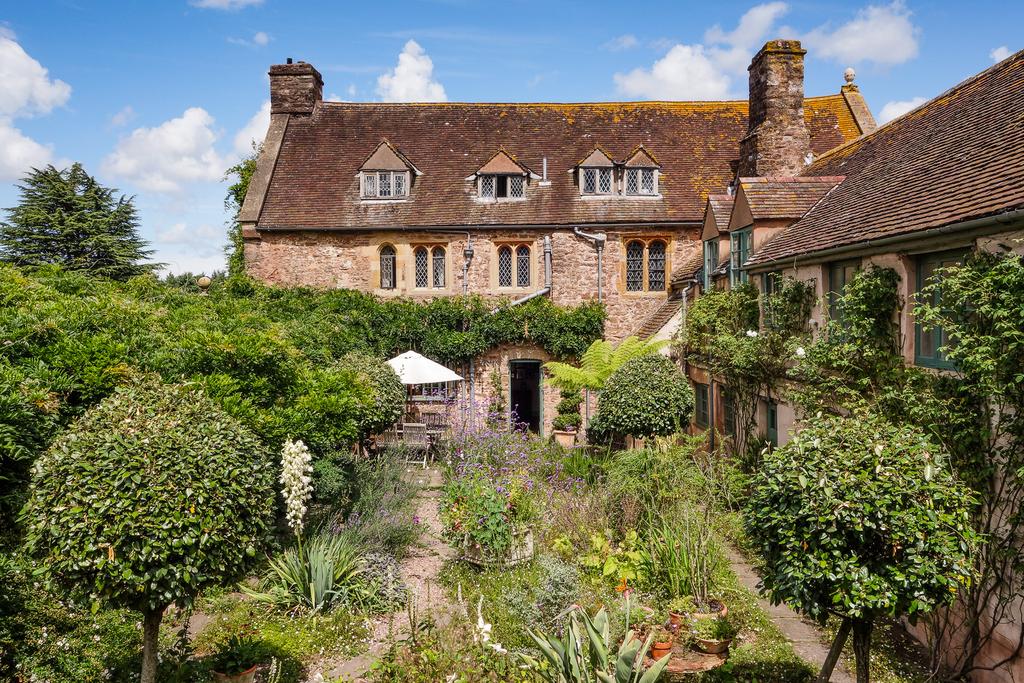 The manor itself comprises a 16,700sq ft complex of residential buildings surrounding its medieval core — the Robb family’s private domain — with outlying elements, including the north wing, the studio annexe, the coach house, its adjoining cottage and a one-bedroom first-floor flat, currently let on assured shorthold tenancies.

The heart of the house is its treasure trove of medieval rooms, among them the vaulted Great Hall and Great Chamber, the Winter Parlour, the Gold Room, the Guest Chamber and the exquisite Oratory, a tiny chapel over the porch. In addition to the dining room, library, master bedroom and bathroom, there are three further bedrooms and a family bathroom. 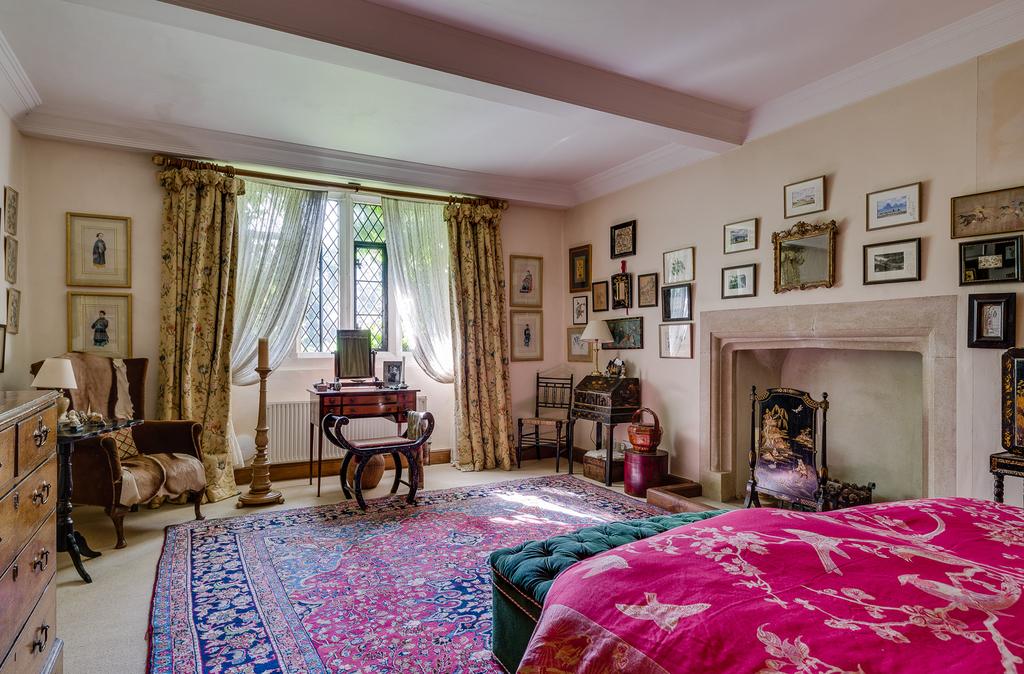 Mrs Robb’s appreciation of Cothay’s heritage is evident as she moves swiftly from one room to another, pointing out elements that a visitor might miss: the original door handle and key of the ancient gatehouse; the massive roof-trusses of the Great Hall with their corbels of wingless angels; the brightly decorated walls of the winter parlour; the oak-panelled dining room with its fine carved chimneypiece; a rare wall-painting here, a fresco or a frieze there; and a charming 21st-century touch: the walls of the Great Chamber, painted with stylised flowers by Mrs Robb’s daughter, Arabella Arkwright.

Cothay Manor in Wellington, Somerset, is for sale via Knight Frank at offers over £5m — see more details and pictures.

James Fisher picks out three of the finest homes for sale right now in the West Country.