The Tullybelton Estate in Perthshire offers a slice of immaculate Scottish country life, with the Highlands on one side and Edinburgh just an hour away.

The other day a colleague and I were having a conversation about how people look for houses. There are dozens, if not hundreds of things that go in to the nature of how we choose, with location traditionally at the top of the list in most cases.

It’s not always location that is the starting point, however, particularly in these days of people move from city to country. When you’re flexible on where you go to begin that dream life, the first step is rather different: setting your price bracket. Almost all of us have a rough idea of a maximum and minimum when we set the sliders on the search pages at countrylife.onthemarket.com (other property portals are available). For some, that might be £400,000; for others it might be two or three times that; and for some, ten or even twenty times that price.

Anybody setting their maximum price to £7 million will be spoilt for choice. There’s everything from a breathtaking penthouse flat at the most iconic building in St Andrews to a 13-bedroom castle to an extravagant Cheshire mansion to a three-bedroom flat in one of London’s smartest streets. And sitting among those places will be the house we look at today: Tullybelton House on the Tullybelton Estate, in Bankfoot, a few miles off the A9 just north of Perth, and on the market via Rettie at £6.75m.

This grand and handsome Victorian mansion dates to around 1850, not that you’d know it to step inside. Every inch of the place has been completely refurbished in exacting detail, so much so that it’s almost got a touch of top-end new build feel about it — something that will help ease buyers’ minds about the potential for maintenance costs when buying a 170-year-old property.

While it loses out on presenting a cosy, lived-in feel, it has a smart finish that brings to mind a freshly-opened country house hotel.

That hotel-style feel extends to the bedrooms and bathrooms, which mix modern design with traditional architectural features.

The main house is huge. It’s not far short of 14,000sq ft, sitting within 250 acres, and boasts three main reception rooms and six bedrooms, all en-suite. 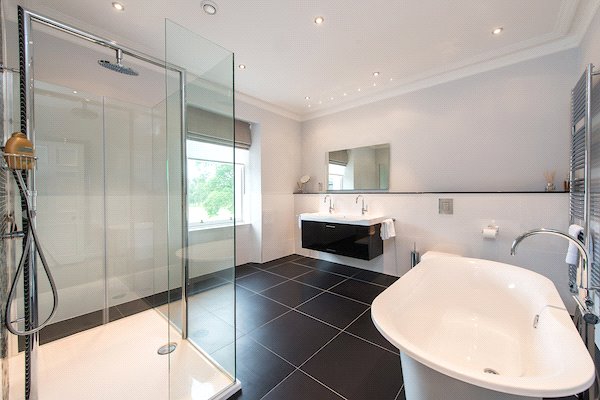 There is a wealth of other spaces, from an eyecatching orangery to a billiards room with a full-sized snooker table.

There is also fine swimming pool — indoors, of course, given that we’re in Perthshire — that has a glass wall to one side, so that you can take a dip while enjoying the sight of red squirrels gambolling though the grounds.

As well as the main house there’s also the coach house, which has been fitted out very much as a working area: it includes the office spaces, gym, garaging and laundry, as well as the boiler rooms that power the house. There are also three cottages, each with two bedrooms, elsewhere on the estate, as well as woodland and a loch.

While the Tullybelton Estate is an ideal secluded country retreat, it’s very well connected: Perth is less than ten miles away, while you can be crossing the Forth Bridge in under an hour. Yet the Tay Forest is almost on the doorstep, and the Cairngorms National Park just half an hour away.

The Tullybelton Estate is for sale via Rettie, for ‘offers over £6.75 million’ — see more details and pictures.

Lilford Hall Estate in Cambridgeshire, for sale via Savills at £7.5m. Credit: Savills