The beautiful Glencruitten House bears the mark of one of Scotland's great architects of the late 19th and early 20th centuries. After years of ownership by a religious community, it's now looking for a new custodian.

Right now, the idea of swapping city life for the wilds of Scotland sounds great — almost too much so. And when we see a property for sale along the lines of Glencruitten House, that feeling gets even stronger. Especially when you consider that Glencruitten’s price tag of £975,000 via Galbraith is less than you’d pay for a terraced townhouse in Henley.

Obviously, Henley is a little more convenient for getting to the capital than Glencruitten’s location, just outside Oban, on the west coast of Scotland. But for those who are able to work from home with occasional forays to Britain’s big cities will surely look at what’s on offer here and wonder what more you could want. 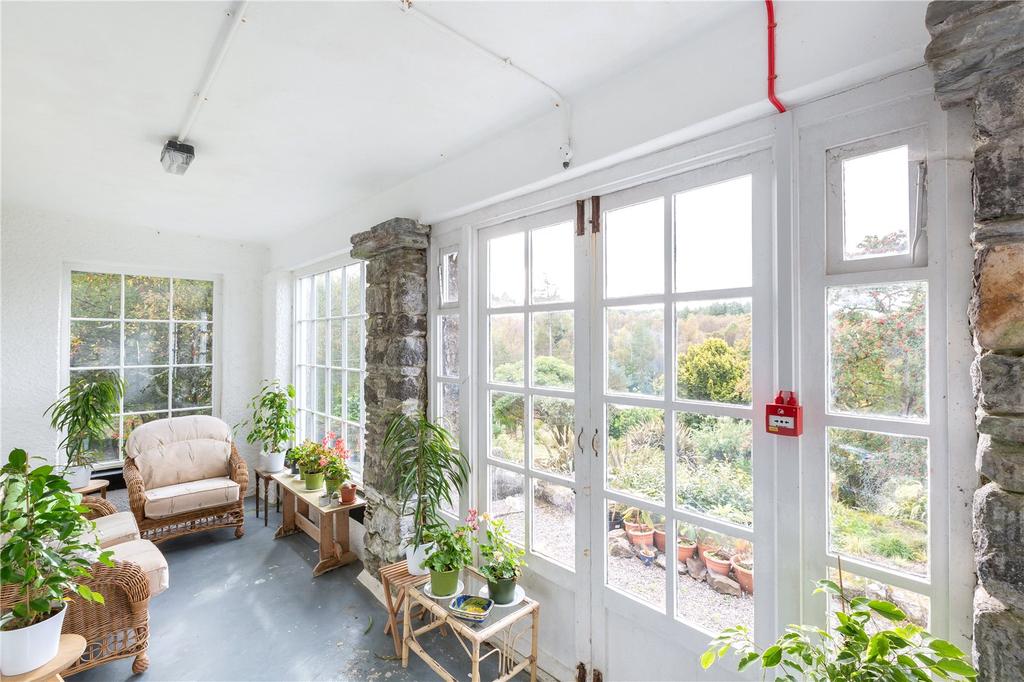 This beautiful house, originally built in 1897 but with extra work done by the great Scots architect Robert Lorimer, has 13 bedrooms, enough reception rooms that its floorplan puts the Cluedo board to shame, and 16.5 acres of land which include lawns, woodland and a spectacularly pretty lake, complete with an irresistibly pretty boathouse. 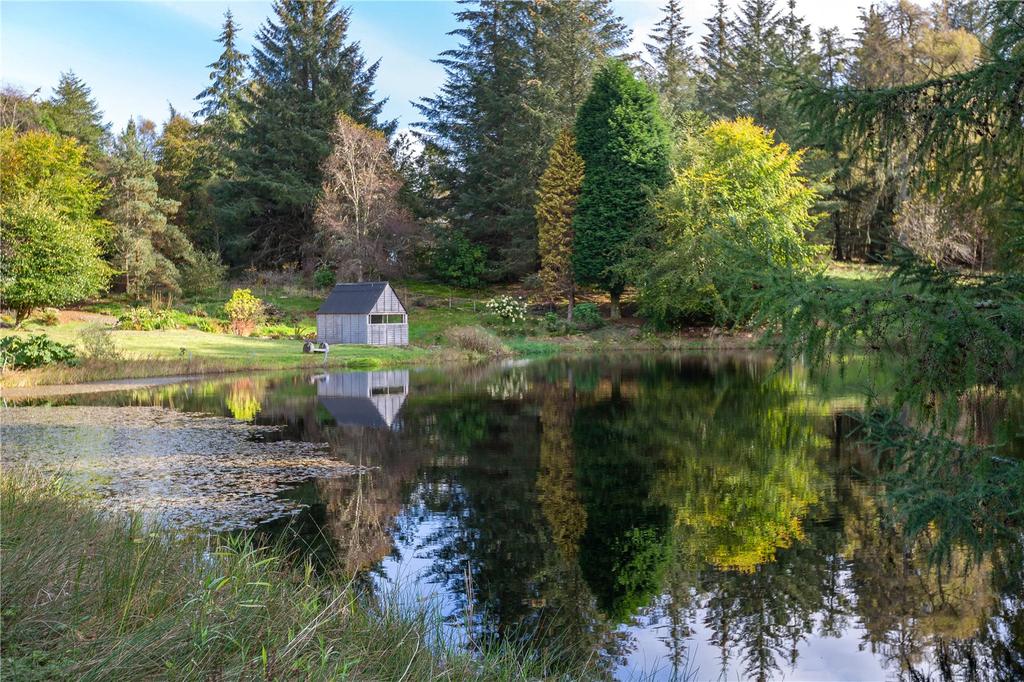 Inside the turn-of-the-century feel of the place is unmistakable, with wood panelling, intricate ceiling details and plenty of natural light. 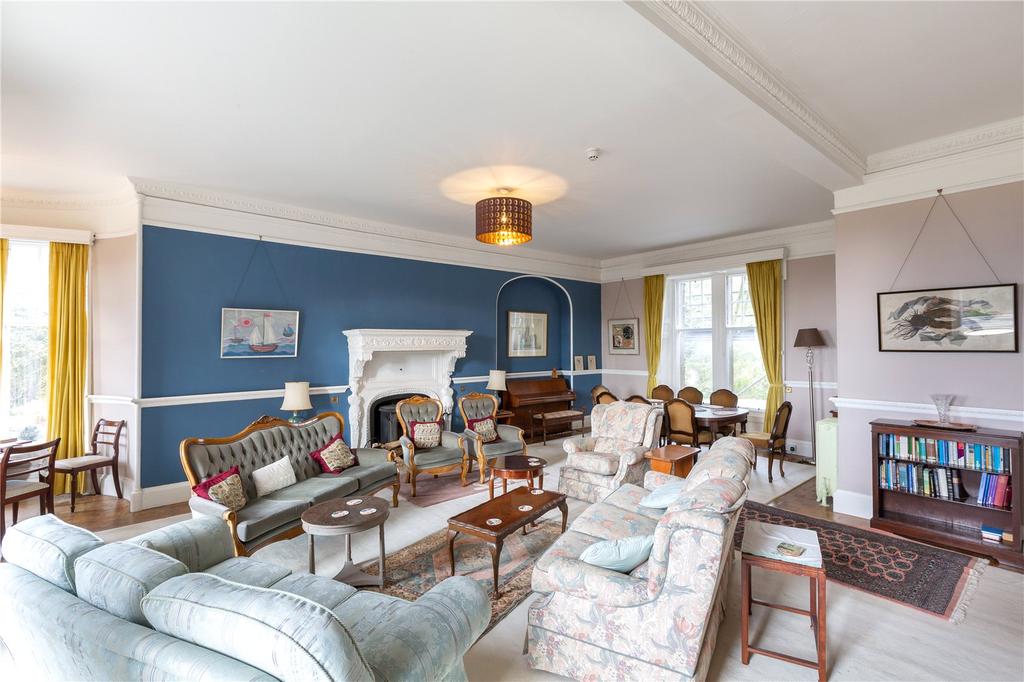 The hallway, with staircase turning up and around beneath a round arch, is a superb example, while the various sitting and dining rooms and kitchens — the house has previously been split into multiple dwellings — each have their own charm. 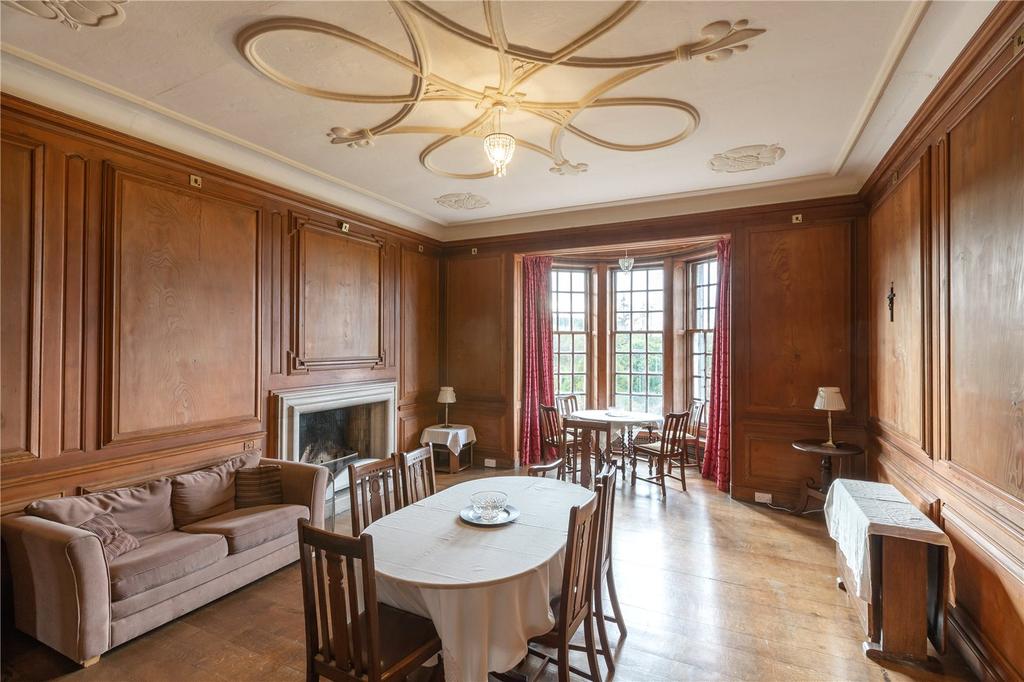 The great highlight, however, is the library — or the Lorimer Library, as its known, after its designer — which is accessed either from the main doorway or else, brilliantly, via a spiral staircase from the estate office below, from which you emerge half-way into the room, opposite a vast stone fireplace.

For the most part the pictures on this page speak for themselves: it’s a truly stunning room, wood-panelled throughout and with a barrel-vaulted ceiling, and with fine views thanks to the fact that it occupies the upper floor of its own wing, which emerges at right angles from the rest of the house.

One particular feature is of special note: the organ at the end of the room, whose pipes sit atop the doorway. 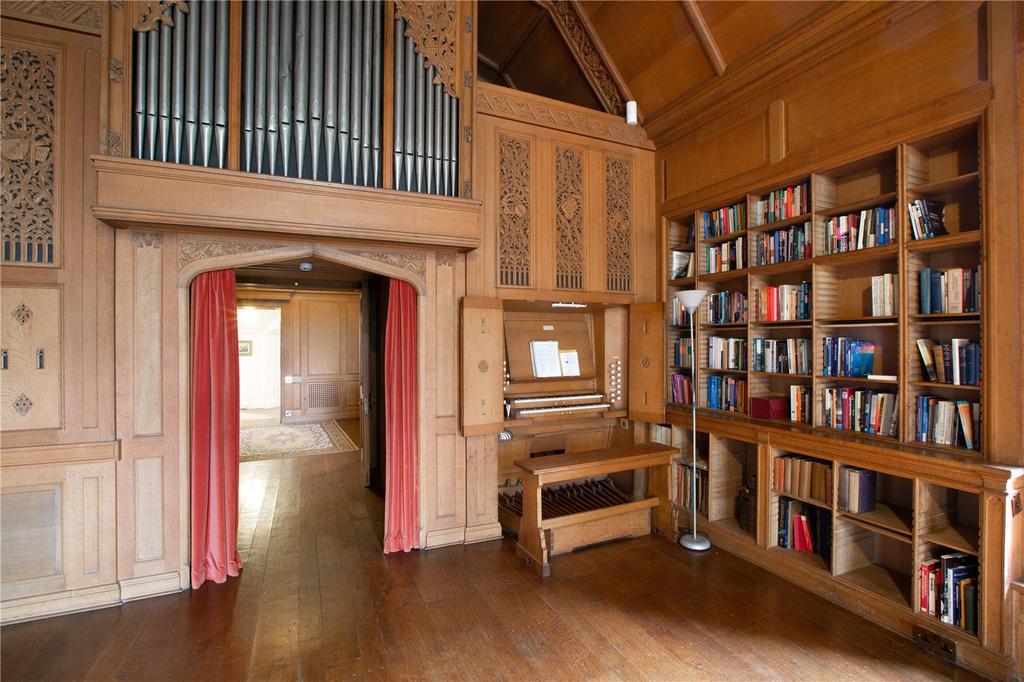 It’s not just any old organ, but rather an ‘original grade A listed Ingram organ with Welte Philharmonic roleplay mechanism’, according to the agents. It’s included with the sale, but apparently needs some work to get it fully working again. 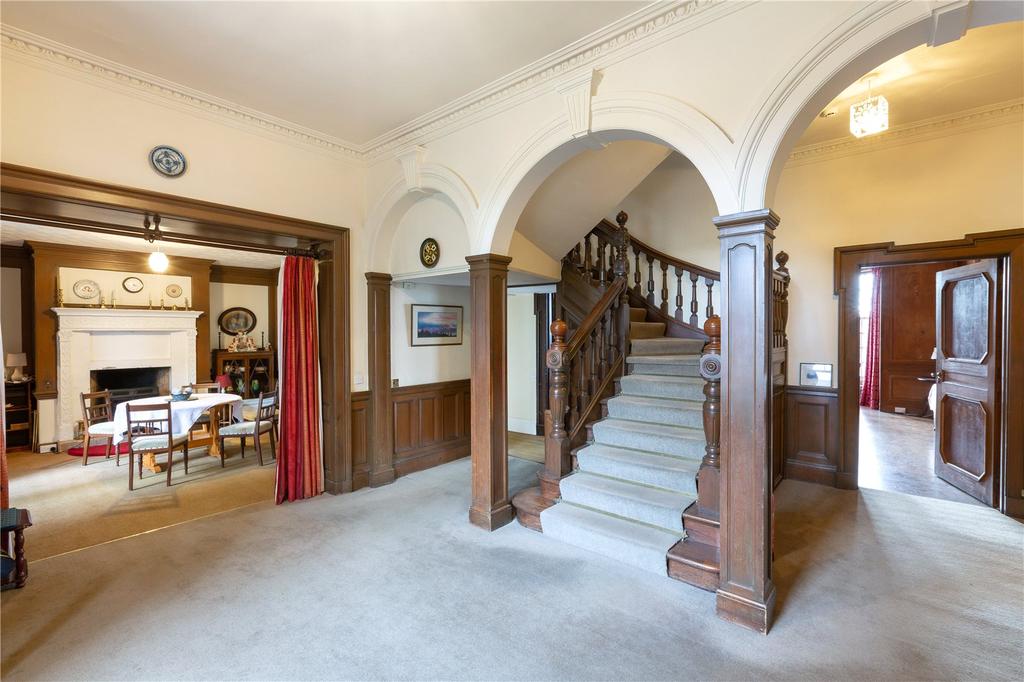 The 13 bedrooms (some currently used for other purposes), are mostly on the first floor, but two are on the second floor,  and several — at each end of the building — are in parts of Glencruitten which can easily be used as self-contained accommodation. 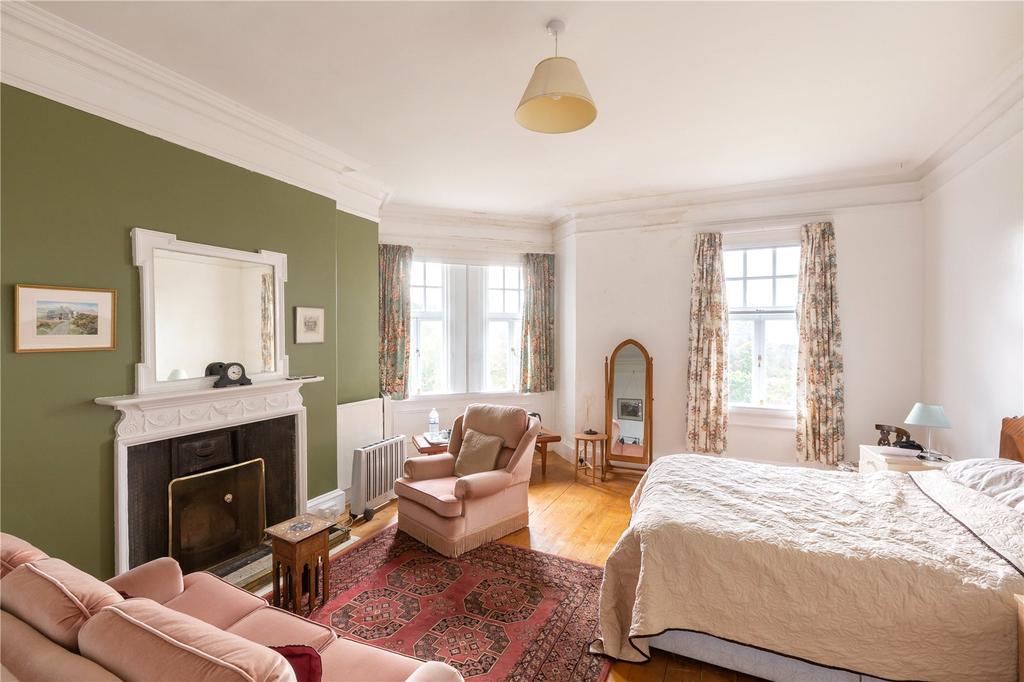 One of these, known as the ‘Turret Flat’, features a huge room with the eponymous turret in one corner, from which there are magnificent views. 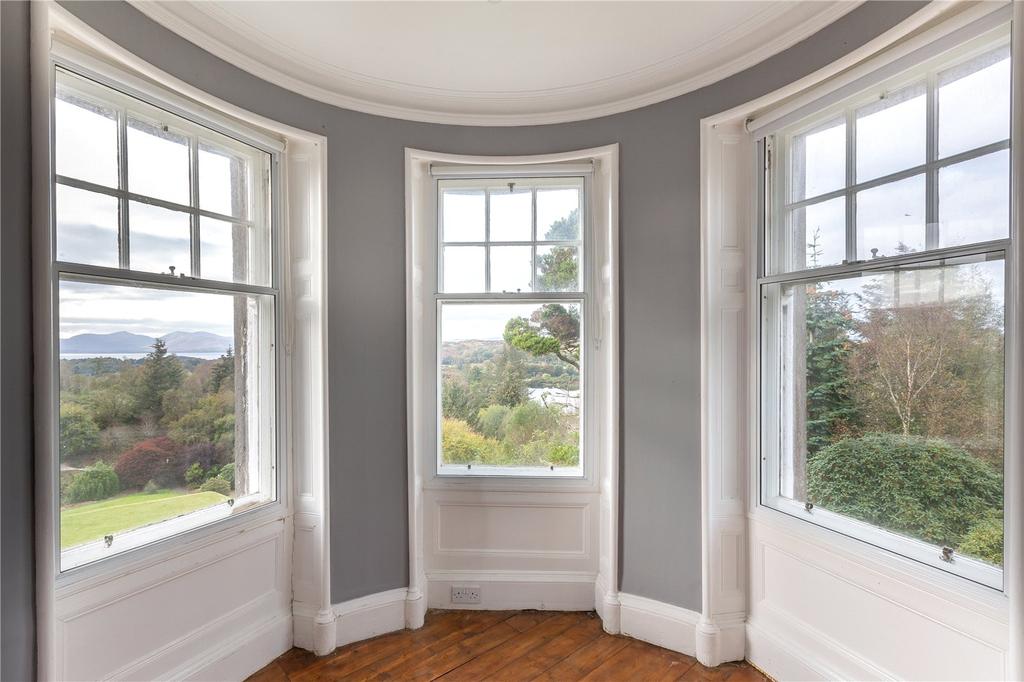 If you’re looking for a spot for that desk for home working, you just found it.

Glencruitten House is for sale via Galbraith at £975,000 — see more details and pictures.