For book lovers who never get the time to read, audiobooks can make a great present. We've picked out five fine options.

All prices correct at time of going to press, but just a word on pricing. Many audiobook services – including Audible – charge far more for a one-off download than they do for a monthly subscription. Audible’s subscription service starts at £7.99, Kobo’s at £6.99 and so on – both allow you to choose any book you like, even if listed at £20 or more. And unlike music streaming services (e.g. Spotify) you still own the audiobook even after your subscription lapses. 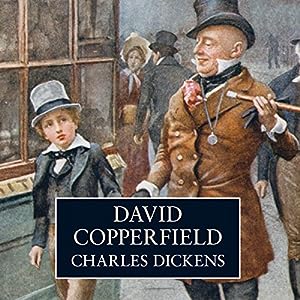 Audiobooks are not cheap, and the equations are particularly tough to take when you considering buying a classic novel which you probably already have on the shelf. But this truly superb reading of a dauntingly-weighty book is worth every penny. Especially when you consider that the running time is over 34 hours.

Not that it feels that long: Martin Jarvis’s peerless ability as both a beautifully clear reader and an awe-inducingly versatile character actor makes the whole thing as light and accessible as a good radio play. Indeed, you’ll quickly forget that the book is being read by just one person – and will be amazed afresh each time you remember that it was all the work of one man.

As for the story itself? For those who’ve never come across it, it’s a wonderfully twisting picaresque narrative of the ups and downs of the title character – no sooner is he down than he finds his way back up, and vice versa, through to the final page.

Dickens named this as his favourite of all his own novels. ‘Like many fond parents, I have in my heart of hearts a favourite child,’ he once said. ‘And his name is David Copperfield.’ After listening to this version, we can see why.

Lincoln in the Bardo by George Saunders, read by a cast of more than 100 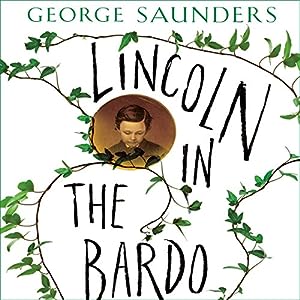 Yes, there’s no mistake in the line above: the audiobook version of this year’s Booker Price winner uses over 100 different voices. Among them are Hollywood stalwarts including Susan Sarandon, Ben Stiller and Don Cheadle, Saunders himself and even several of the author’s children. The result is a rather unusual audiobook recording which, as you’d imagine, is often patchy and confusing. No doubt that is exactly the intended effect, since one of the book’s central aspects is its bewildering cacophony of voices, both trustworthy and untrustworthy.

The novel itself deals with a cast of often bizarre characters stuck in the Bardo, imagined here as an afterlife hybrid which borrows elements of Christianity, Buddhism and several other major religions, but which primarily acts as a Purgatory between states. One sad night, Abraham Lincoln’s young son Willie joins the dead; his grief-stricken father’s visit to see his beloved boy’s tomb, and his effect on the lost souls who witness his vigil, is touching and ultimately inspiring.

Murder on the Orient Express by Agatha Christie, a full-cast recording 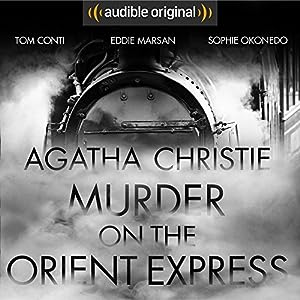 Veteran actor Tom Conti steps in as the great Belgian detective in one of Agatha Christie’s most enduringly popular tales. A passenger is murdered during the night on a snow-bound train in Yugoslavia; happily for the listener, the world’s finest detective happens to be aboard at the time to solve an initially baffling case.

Audible’s adaptation of the story is a high-quality production: as well as Conti, Art Malik has a role as the narrator while there are also contributions from actors including Sophie Okenedo and Rula Lenska. Even the sound effects were apparently recorded on the train itself, and the result is a gripping and authentic listen that is cleverly adapted from the original text, with nothing missed out – the running time of over six hours speaks for itself.

The one bugbear? Conti’s take on Poirot gives the detective an accent so thick it almost verges into parody – you get used to it after an hour or so, but the strength of it is initially very distracting and also at odds with the intellectual precision of the character.  If that sounds a worry and you’re happy to live without the sound effects and stick to Christie’s own words, there is also an unabridged recording of the book by David Suchet himself, the brilliant actor who played the sleuth on television for almost a quarter of a century.

Available via Audible,  or you can buy the David Suchet version here 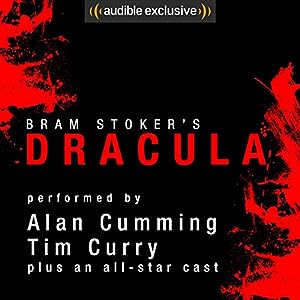 Bram Stoker’s classic Gothic horror is 120 years old in 2017, which seems as good a time as any to get back to an original text which many have probably never read. The tale is told via a series of reminiscences in diaries and letters kept by the protagonists over the space of several months in Romania and England – Jonathan Harker, the ingenue who finds himself in the famously forbidding Transylvanian castle, but also everyone from his fiancée, various other friends and the psychiatrist-cum-vampire hunter Van Helsing.

The structure of the book lends itself well to the multiple narrators of this award-winning audiobook, with Simon Vance as Harker doing a fine job of drawing the listener in over the first half or so of the 15+ hour running time. Tim Curry’s memorable rendering of Van Helsing livens up an extended ending which, had Stoker’s classic been published today, would probably have been cut back ruthlessly by his editor.

Listed as an Audible exclusive, but we also found it  available from £13.30 on MP3 CD.

Childhood Classics including Alice in Wonderland and Wind in the Willows, read by Alan Bennett

The Wind in the Willows; Alice in Wonderland; Through the Looking Glass; Winnie-the-Pooh; and The House at Pooh Corner, all read by the great Alan Bennett. Perfect for long car journeys to see relatives over the holidays – available as a CD or download.

The Secret Life of Cows by Rosamund Young, read by the author 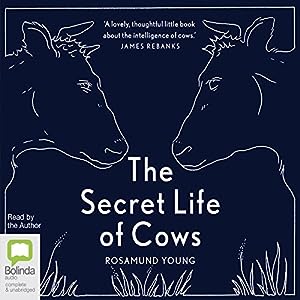 Rosamund Young’s beautiful writing – which we’ve featured on this very website over the past few weeks – brings this very personal memoir of farming to life. The idea of treating each animal on a farm as an individual rather than a commodity is a breath of fresh air, and speaks of the incredible respect that Rosamund has for the creatures in her care.

It’s an intriguing, thoughtful, funny, sad and fascinating – the author’s reading is clear, if a little on the slow side, but in such a personal book the added authenticity of hearing the writer’s words in her own voice makes up for anything that a professional actor might have brought.

After something special for a person who really appreciates their food? Our suggestions are certain to have something that's just

From £50 to £1,280, we've selected some lovely items to help you find the perfect present.

For the man in your life, we've all sorts of things – from simple gadgets to truly magnificent things.