Everyone knows Brits make the best on-screen super-villains - Jonathan Self picks out his favourites.

‘When Hollywood wants someone to play the bad guy, it casts a Brit,’ said the great film critic Barry Norman.

And while not all Hollywood baddies are British, a disproportionately high percentage of them are. From Christopher Lee in Horror of Dracula to Alan Rickman in Die Hard and from Angela Lansbury in The Manchurian Candidate to Ian Holm in Alien, the majority of wrong ’uns speak with an English accent.

Here’s our pick of the best.

Anthony Hopkins in The Silence of the Lambs

Hannibal Lecter had already been chillingly played by another British actor, Brian Cox, in Manhunter, but it was Hopkins who’s best remembered in the role and who took home an Oscar. His unblinking portrayal was voted as best villain of all time by the American Film Institute.

Jeremy Irons in The Lion King

No one does infamy quite like Mr Irons. He’s played one of the Borgias, Henry IV, Claus von Bulow, deranged twin surgeons and many other anti-heroes. However, his greatest claim to wickedness may well be as the voice of Scar in Disney’s take on Hamlet.

James Mason in North by Northwest

One of Hollywood’s biggest stars, he played the cruel, ruthless Phillip Vandamm in Hitchcock’s masterpiece. Leonard: ‘You’re not taking her on the plane with you?’ Vandamm: ‘Of course, I am… This matter is best disposed of from a great height, over water’. 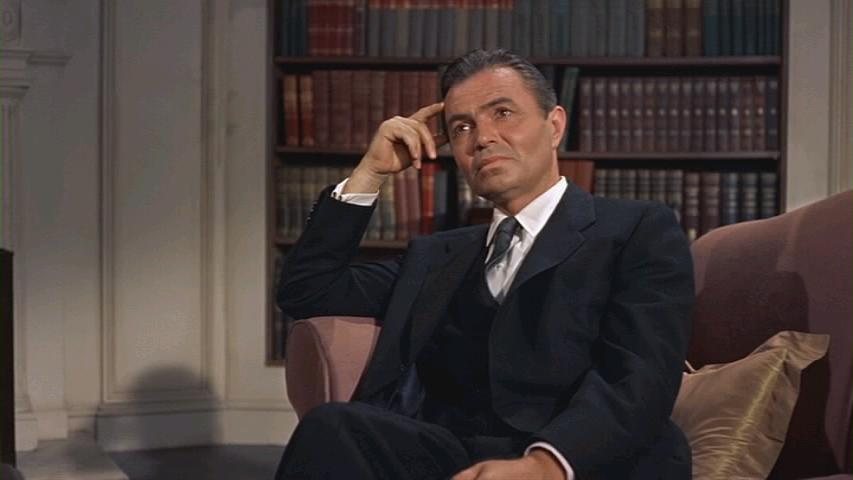 True, Anderson was actually Australian, but she plays the mean-minded, vindictive Mrs Danvers in Hitchcock’s Gothic drama Rebecca with a perfect English accent. It’s worth noting that few British movie villains are ever Irish, Scottish or Welsh, although Robert Carlyle comes to mind.

Terry-Thomas in School for Scoundrels

Terry-Thomas played one role repeatedly and played it well, that of the weak, philandering, swindling, upper-class bounder – the archetypal cad, in fact.

George Lucas turned to some of our finest classically trained actors to bring a touch of gravitas to his swashbuckling space saga. Balancing Alec Guinness’s noble Obi-Wan Kenobi is an array of villains harnessing the Dark Side in beautifully delivered RP — and, in Cushing’s case, unseen carpet slippers.

Adopting a crisp German accent, he made an impact on Hollywood as the mastermind thief foiled by Bruce Willis in Die Hard (in Die Hard: With a Vengeance, Gruber’s brother is improbably played by Jeremy Irons). However, he kicked it up a manic notch here, effortlessly stealing the film from Kevin Costner with ad-libbed lines such as ‘Cancel the kitchen scraps for lepers and orphans, no more merciful beheadings, and call off Christmas’.

In the series of Hammer Horror films inspired by Bram Stoker’s novel, Lee may not have had any lines initially and his appearances as the Count are brief, but his presence and sex appeal are undeniable. Over a long career, he’s played most of the great villains, from monsters to wizards.

George Sanders in The Jungle Book

Donald Pleasence in You Only Live Twice

Christmas wouldn’t be Christmas without a Bond film. And a Bond film wouldn’t be a Bond film without a wannabe world dictator. In the case of You Only Live Twice, he’s played by a deeply menacing and fabulously scarred Donald Pleasence. Among the baddies menacing 007 have been Christopher Lee, Charles Gray, Jonathan Pryce, Steven Berkoff, Sean Bean, Robert Carlyle, Julian Glover and Toby Stephens.