The milestones which help travellers find their way across Britain have been a feature of the nation's highways and byways for 2,000 years. Matthew Dennison traces their history.

‘In many parts where ways be doubtful,’ Mathew Simons noted of the English countryside in his Directions for English Travillers of 1635, the equivalent of signposts were to be found. Not quite everywhere, however, and it wasn’t until 1698, in the reign of William III, that parishes nationwide were required by law to place guideposts at crossroads.

Some of those guideposts remain today – short, stone pillars indicating distances in miles to the nearest towns and villages. Among the more picturesque features of British roadsides, they are known as milestones, a term first coined in 1746.

Later milestones include those that were either made of metal or constructed from stone with metal letter plates and the term itself has entered the vernacular. It has come to indicate a key event in life’s journey, one’s personal ‘milestones’.

A proliferation in road signage is one of the less-remarked upon features of the 18th century. Throughout the Georgian period, road transport increased as a result of nationwide growth in manufacturing industries and burgeoning overseas trade. With it arose a need to move both finished goods and raw materials swiftly.

Charles I had spearheaded a postal service in the same year that Simons’s Directions was published: its expansion in the next century and a half lay behind the introduction of the first mail coach, in 1784. However, as anyone who has ever looked at contemporary images such as James Pollard’s The Mail Coach in a Thunder Storm on Newmarket Heath will know, road quality continued to be atrocious. 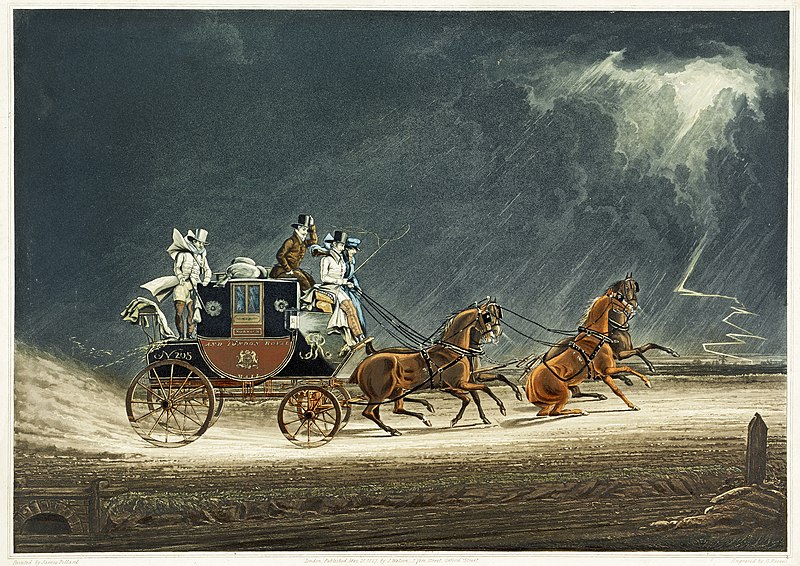 Successive 18th-century governments disdained to provide public funding for anything approaching an upgrade, but they did insist that local trusts provide milestones at every turnpike and, from 1773, guideposts (which, being taller, were more easily visible to coach and carriage drivers and their passengers).

Today, whereas wooden guideposts have perished, milestones still survive from Somerset to Finchley, Lampeter to Machynlleth – about 9,000 of them from the 20,000 miles of roads that were once marked in this way, according to the conservation group the Milestone Society.

The history of the milestone, however, pre-dates 17th-century legislation. It was the Romans who introduced distance markers to the first English roads, originally placed every 1,000th double step. Milestones of this sort once enabled Roman Britons to tick off the 22 miles of their northerly journey from Cataractoni (Catterick in North Yorkshire) to Vinovia (Binchester in Co Durham).

A Roman milestone over 2000 years old, located close to the Roman site of Vindolanda in Northumberland. Pic: Alamy

Travel information may not have been the only purpose – perhaps not even the primary purpose – of such markers. A Roman milestone discovered near Leicester lists the titles of the Emperor Hadrian more prominently than the welcome news that only two miles remain to the traveller’s destination, then called Ratis.

Roman milestones evidently doubled up as means of disseminating key political messages, notably the political allegiance (especially following a change of regime) of the governor, urban community or military unit responsible for their erection. Roman-British milestones of this sort commemorate emperors from Carausius, ‘Emperor of the North’, to Constantine the Great.

Of the more than 100 Roman milestones that still remain today in the UK, most survive in remote rural locations. None erected after the reign of the 3rd-century Emperor Florianus includes distances to the traveller’s destination.

The milestone’s heyday proved brief. Changes in modes of transport and their speed account for its declining fortune from the middle of the 19th century. Often low in height and marked with small-scale lettering, milestones were ideally suited to those travelling on foot or slowly. The popularity of the railway and, later, the invention of motorised road transport effectively called time on these historic markers.

A milestone in Richmond, Surrey

The railways dealt a body blow to an old-fashioned road network that had been characterised by turnpikes and tolls and administered by turnpike trusts. Rail transport contributed in large measure to the bankruptcy of a number of these trusts. With their demise – and the transfer to county councils of the responsibility for maintaining roads in the Local Government Act of 1888 – disappeared their legal requirement to erect milestones.

Later, the ubiquity of cars inspired new road building and the enlargement of existing roads. Milestones were either left behind, on byways superseded by newer, wider, faster routes, or else cleared out of the way of road ‘improvements’.

Today, of the nine milestones once recorded on the turnpike road from Farnham to Guildford in Surrey, only one remains. Three other turnpike roads converged on 18th-century Farnham, from Odiham, Bagshot and Alton. These, too, retain a single milestone each, on Farnham’s outskirts.

Decline isn’t necessarily fall, however. For the eagle-eyed traveller – on foot, horseback, bicycle or even in a car – milestones remain a memento of travellers past on British lanes and byways.

Meghan Markle isn’t alone in her love of these alert, sturdy little dogs with their melting eyes and purposeful demeanour,

A century after his death, Edgar Degas is the subject of two new exhibitions in Britain. Matthew Dennison appraises these

Matthew Dennison celebrates the conversation piece, the intimate Georgian form of portraiture which celebrated families without the usual swagger or

From the ‘teepee’ to the ‘log cabin’ method, knowing how to light a fire and keep the home fires burning