Trending:
The French bulldog and the labrador are far and away the most popular pedigree chums. Credit: Alamy Stock Photo

The Kennel Club have released their latest stats on dog registration; the RHS are warning about a potential new garden threat; why midges are getting worse; and the tale of the first plane to cross the Atlantic, 100 years ago today. 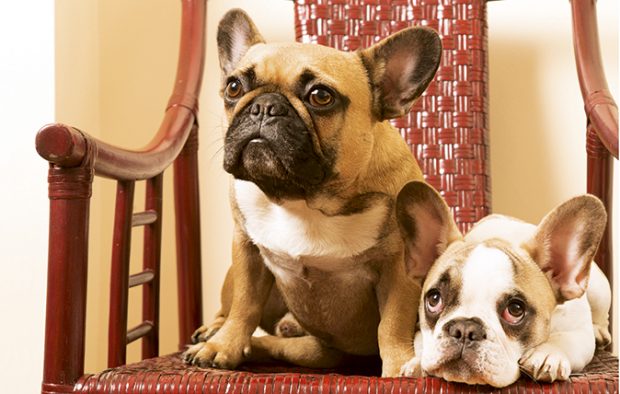 The Kennel Club have released their latest statistics on registration of pedigree dogs, with the numbers now revealed for the first quarter of 2019.

The results? French bulldogs are still at the top of the pile, having beaten labradors into second place. Some 8,210 ‘frenchies’ were registered in the first three months of the year; that’s fairly steady compared to 12 months ago, and a fair chunk ahead of the labrador on 7,121.

Elsewhere in the stats there’s been an apparent drop-off in the popularity of pugs (1,895 compared to 2,579 in 2018), while boxers are still just ahead of dobermans and rottweilers in the ‘working’ category. Among terriers, the big news is that the Staffordshire bull (1,109) has overtaken the border terrier (823); this time last year there were over 1,2000 new borders registered.

Finally, among the threatened breeds, the sealyham’s revival – after it was championed by Country Life –  is still going well but there’s been a worrying dip in numbers of Sussex spaniels about.

The bubbly nest of a spittlebug among needle-like plant leaves.The experts at the RHS are asking gardeners to be on the lookout for bubbles on their plants as picture above – the telltale signs of the spittlebug.

The problem isn’t so much the bug itself but rather a strain of a virus called Xylella which has already killed millions of trees (especially olive trees) in Italy. It’s not arrived in the UK yet but the more vigilant people are the more likely that the plan to fight back can work, just as it did with the eradication of the Asian longhorn beetle. Though in separate news the Daily Telegraph warns that cheap furniture bought off Ebay could be leading to a comeback in the latter.

Survival of the fattest: How bird feeders changed Britain

‘When I began birding in the 1960s, the goldfinch was a fairly scarce bird, found along hedgerows and in weedy fields,’ wrote Somerset-based naturalist and author Stephen Moss in The Guardian this weekend. ‘ Today, goldfinches can be seen in four out of five gardens, welcomed for their musical twitter and striking gold, red and black plumage.’

The reason? Garden bird feeders. Moss’s piece is an interesting look at how our love of birds has helped boost their numbers – though it’s not entirely clear which birds benefit and at what cost to which others. ‘Most birds coming to feeders are the larger, commoner and more aggressive species, they will gain an unfair advantage over the smaller, scarcer and weaker ones,’ he explains, though adding that it’s surely a net benefit to birds that we’re helping them thrive.

On May 27, 1919, the prosaically-named NC-4 touched down in Lisbon to become the first aeroplane to fly across the Atlantic. The United States Navy had set out with three aircraft, but only one made it — despite the support of dozens of crew, and a trail of 22 ‘station ships’ across the Atlantic which gave the aircraft points to navigate by. The NC-4 spent the next four days flying on to England to complete its historic 23-day journey.

Stat of the Day

The number of extra days that midge season has been lasting of late, due to warm, wet summers which help them thrive. The research ‘also found that midges carry a wider range of viruses, which threaten epidemics of exotic diseases in livestock,’ according to the report in The Times.

Researchers from the government’s Pirbright and Rothamsted laboratories described the increased incidence of midge-borne viruses as a ‘spectacular shift in global pathogen distribution’. We’re not 100% sure what that means, but it certainly doesn’t sound good.

And finally… if you go down to the beach today…

You’re sure of  a big surprise – namely getting arrested for picking up pebbles.

Heart in the right place? Probably.

Could fungi hold the key to how life evolved on dry land? The early relatives of these Fly Agaric mushrooms could yet hold the key. Credit: Alamy Stock Photo

Fungi has been discovered that could change the story of how life evolved; an insider's guide to spotting seals; how

This morning we report hope in the fight against box caterpillars, take a look at what really happens when wolves

Plastic straws washed up on beaches are a depressingly-common sight. Credit: Alamy

In today's news round-up, we look at the latest efforts to tackle plastic pollution; worrying update on what might happen