Weather forecasters might not always get it right, but technology is making meteorology more of an exact science than it has ever been. The BBC’s Philip Avery explains.

‘You always get it wrong’ is a refrain that’s accompanied my 30 years in meteorology, initially with the Royal Navy and later with the BBC.

I’ve never taken it personally – perhaps that’s my mistake – but it’s an occupational hazard and one that no other profession suffers.

It’s always been the case, ever since the earliest days of scientific forecasting. Admiral Robert FitzRoy, the man who pioneered those efforts in the mid-19th century, was utterly demoralised by the negative reaction to his attempts at predicting the weather, and his dismay contributed to his subsequent suicide. Yet subsequent analysis showed that FitzRoy’s storm warnings were well-founded on 50% of the occasions, saving perhaps hundreds lives each time. And things have only improved: modern five-day forecasts are as accurate as next-day forecasts were just a few decades ago.

Meteorology is a new science, with many advances coming within the past 200 years. That’s not to suggest that ancient civilisations took pot luck. The Babylonians predicted the weather from a combination of cloud patterns and astrology. Aristotle took a more scientific approach in ancient Greece, describing observed weather patterns in his book Meteorologica.

There was, however, no suggestion of systematic experimentation. The use of the word ‘heavens’ by pioneers had a definite flavour of the perceived influence of God or the gods on the prevailing weather.

By the 19th century, heavens gave way to atmosphere and scientific rigour was applied to the lore accumulated by those whose lives were affected by weather’s vagaries. Britain was moving from an agrarian to an industrial economy, but half the male population still worked the land. Weather really mattered.

Luke Howard’s cloud classification brought Linnaeus’s order to the skies. At last, observers had a standardised language, albeit Latin. Soon, Sir Francis Beaufort grappled with similar issues in describing the effects of wind, devising his eponymous scale in 1806.

Further advances in the 1830s were spurred by pure science and economics right across the Western world. British territories in the Caribbean had often been affected by terrible storms and the 1831 destruction of Barbados, home to Britain’s valuable sugar trade, drew Lt-Col William Reid of the Royal Engineers there early in 1832. He brought with him a passion for meteorology and asked fundamental questions about what caused the Great Barbados Hurricane and its track.

Lt-Col Reid’s work chimed with that of American enthusiasts, who were developing their own theories on storms – including William Redfield, the first to plot the anti-clockwise path of hurricanes as deduced from fallen trees – but it was Samuel Morse’s electric telegraph that proved to be key in linking isolated observers and an almost real-time exchange of information. 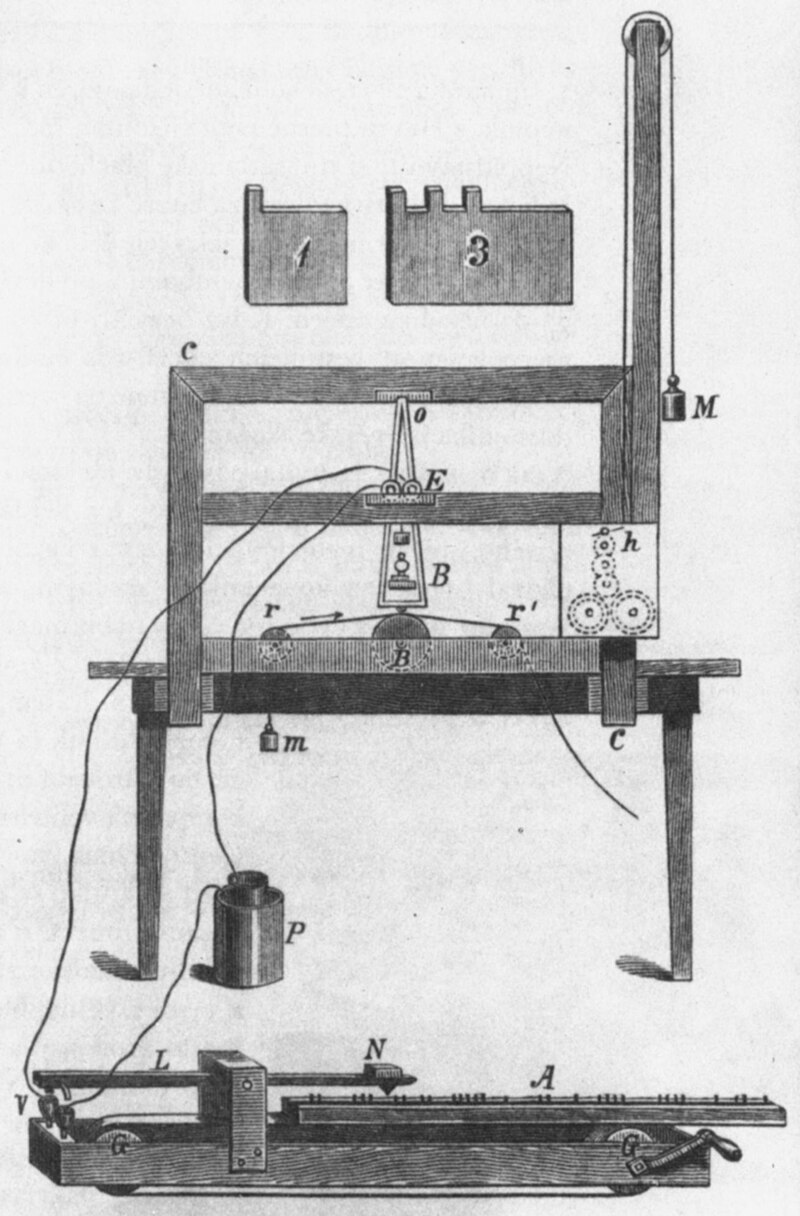 Things were also progressing in Europe. Morse’s telegraph gave James Glaisher from the Royal Observatory the scope to offer weather reports from 29 telegraph stations to the newly established Daily News. These messages were published the following day – the first recorded connection of the telegraph and weather.

Although Lt-Col Reid had been driven to the West Indies by economics, it was the rapid growth of shipping in British waters that encouraged Admiral FitzRoy to protect mariners closer to home.

It’s inconceivable in modern times that all who set sail had no forecast. Shipping losses, both human and economic, mounted, yet, as is the way with human nature, it took a headline-grabbing disaster before steps were taken.

That tragedy took place on the night of 25 October 1859 when The Royal Charter, a passenger ship en route from Melbourne to Liverpool, foundered on the Anglesey coastline. All but 40 of the almost 500 souls aboard were lost. The same storm also devastated other parts of Britain.

As a result, a previously mooted idea of storm warnings was acted upon. Starting with only 13 observers, FitzRoy soon extended his storm-warning network and started to send his two-day ‘forecasts’ to The Times. These were the first weather predictions to be issued by a Government agency, despite there being no official authorisation.

‘You always get it wrong’ may have rung in FitzRoy’s ears as questions arose about the forecasts’ accuracy, the size of his budget and the lack of scientific theory. Consequently, his forecasts were suspended, although a lobby soon formed for their resumption. Subsequent analysis showed that about half of his warnings in 1863 proved warranted.

Failing physical and mental health, financial pressures and the questioning of his life’s work proved too much and he took his own life on April 30, 1865. It was a desperately sad end for the man who captained HMS Beagle during Charles Darwin’s famous voyage to the Galapagos, but his legacy lives on: his work in forecasting laid the foundations for the modern Met Office.

Others soon took up the baton. Glaisher continued his ballooning and began to offer thoughts on rivers of air, a first hint at the existence of jet streams. John Tyndall from the Royal Institution had worked on the absorption and radiation of heat by various gasses. Although this may sound a little niche, he was preparing the way for our understanding of greenhouse gasses and resultant climate change.

In one leap, we’d moved into the modern era – from men in balloons to jet streams and climate change. Mathematicians and physicists had developed meteorological theories, so it was a natural step for them to harness computers to model and predict the weather. Lewis Fry Richardson published Weather Prediction by Numerical Process as early as 1922, but it was the mid 1950s before model-driven forecasts first appeared, the product of sufficient computing power.

Computers capable of trillions of calculations per second, improved satellite and radar imagery and advances in atmospheric physics have all driven forecast accuracy. Today’s five-day forecast has the precision that tomorrow’s forecast would have had a few decades ago.

I was never given careers guidance about being a weather forecaster. Classic A levels, a degree in politics and economics and an early career in the Royal Navy as a trainee helicopter navigator are not the standard route to forecasting, but the intervention of Sooty – yes, that well-known glove puppet – changed my life.

An inability to get my aircraft to the right place at the right time did for my brief flying career. I went to see the chief flying instructor, who professed to never having chopped anyone from flying training. He reached into a drawer; Sooty emerged, whispered in his ear ‘Sooty says you’re chopped’ and my flying career was over.

Thankfully, the Royal Navy was short of forecasters and that occupied me, full- and part-time, for 30 years. As with all old sailors, there are many tales to tell, but time and space – thankfully, some would say – don’t permit the telling. Along the way, I fell, by chance, into the world of meteorological broadcasting.

This world, as with the science itself, has evolved beyond all recognition. I started as the digital age of television dawned. A few colleagues and I literally carried the boxes in off the street to build a studio in Birmingham’s Jewellery Quarter.

Invention, in so many ways, was the order of the day. Within 18 months, myself and four others were formally taken on at an expanding BBC Weather Centre.

At least those colleagues’ names weren’t a problem, as this was the era of Bill Giles, Michael Fish and Ian McCaskill. The scope of the work, even then, would spin my head. Now, graphics are more sophisticated, online news and social media fill a shift in their own right, and the pace of reportage means the modern broadcaster has to be ready to explain stories from across the globe at a moment’s notice.

Our ethos has also changed. We now aim to take our viewers and listeners on a story-telling journey, with greater explanation of the underlying science and, rightly, more honesty about the uncertainties within our forecasts. Differing models can offer up differing outcomes and some of our broadcasts explain this.

Although I’m no Admiral FitzRoy, I think, as he would have done, that the occasional uncertainty doesn’t qualify for the jibe of ‘you always get it wrong’.

Mizzle, drizzle, dreich and dibble are just some of the many ways we describe rain. Antony Woodward considers our obsession

HHJEPK Lemonade with lemon, mint and ice on garden table

Andy Peters is probably the only person in Britain who could describe himself as a full-time ship’s carver. He spoke