Military watches have come a long way from the trenches of the First World War – today, they're the choice of the gentleman who prefers utilitarian timepieces, and hugely collectable. Robin Swithinbank charts their rise.

When I was 14, I enrolled in the Combined Cadet Force at school. I have a distinct memory of going to the stores to sign my two-year contract and pick up my kit, issued by a sandpaper-tongued Geordie sergeant major. On the pile were a green beret, two uniforms and a pair of heavily worn black boots. I had size 13 feet and it appeared the British Army had just one pair in that size, handed down from one village idiot to the next.

To my chagrin, I wasn’t issued with a watch. I’d developed an early liking for wristwatches and had about 20 by the time I learnt to stand to attention in the school quad, shouted at by a fifth-former with a stripe on his arm. Casios, Swatches, stuff I’d saved cereal-box tokens for – that kind of thing.

Perhaps because of this, no one ever invited us to ‘synchronise watches’, which I’d expected to be a central element of the military experience. However, as we were never called upon to advance under artillery barrage, perhaps that shouldn’t have been a surprise.

Still, to a pubescent boy, military watches carried a certain allure and masculinity. Made for the archetypal ‘real’ man, they were designed to keep a chap safe.

Historians point out that wristwatches were military timepieces before they were anything at all – at least for men. Although early timekeepers were developed for aviators and racecar drivers, what propelled them from pocket to wrist was the First World War.

Officers soldered wire loop lugs to their pocket watches and mounted them on their wrists, a much more convenient place for coordinating going over the top.

The look stuck, but it wasn’t until the Second World War that they became universal. Heroic pilots returning with their bomber jackets and standard-issue wristwatches did wonders for what were once seen as little more than bracelets.

Towards the end of that war, the British Army, recognising the need for robust pieces that could cope with mid-20th-century warfare, commissioned 12 companies, including Omega, IWC and Jaeger-LeCoultre, to produce the first military-spec watches.

These had to be waterproof, luminous, highly accurate and built around sturdy steel cases. They were delivered in 1945 and became known as the Dirty Dozen, a series that has become increasingly collectible as the trend for smaller watches (the largest of the dozen is the Longines at 37.5mm) has returned. Each carried a case-back engraving of W.W.W. (Wrist. Watch. Waterproof.) and the broad arrow symbol on the dial, showing they were property of the Crown. 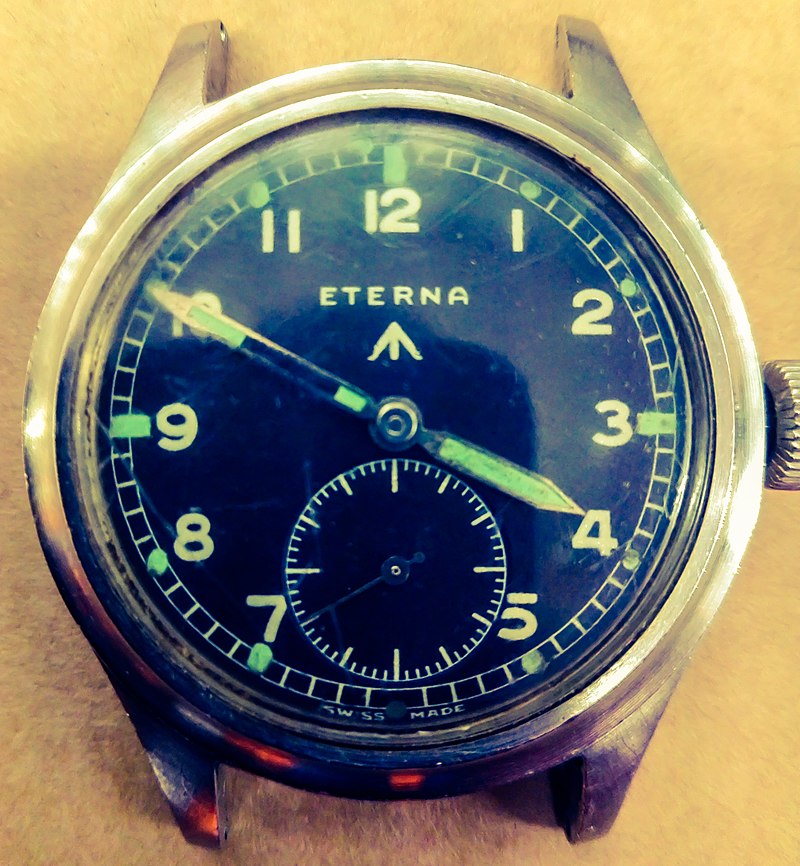 Some 145,000 of these were made, although not in equal numbers. Omega made 25,000 and little-known Grana is thought to have made fewer than 1,500. According to Toby Sutton of auction house Watches of Knightsbridge, a Grana today will fetch as much as £6,000, the Omega less than £2,000 and the Vertex, Cyma and Timor models about £500–£700. Collectors with all 12 are few and far between.

“You can bash them about a bit and, bar the odd scuff, they won’t betray you”

In the decades since, military watches have mirrored advances in military technology. In 1953, Rolex introduced the Submariner, the world’s first water-resistant watch to 100m. The civilian versions were hardy enough, more so those modified military-spec ‘MilSub’ pieces, such as those issued to the Royal Navy in the 1970s.

These had luminescent tritium dials, indicated by a circled ‘T’ on the dial, and are very collectible – Bonhams sold one for more than £120,000 a couple of years ago.

Tudor, sister brand to Rolex, had its own Submariner line and supplied standard-spec watches to the US Navy and the Marine nationale française. The 1954 original was recently revived as the Heritage Black Bay, helping to revitalise the brand’s fortunes.

In 1952, Breitling announced the Navitimer, with a circular slide rule that could deliver useful insights to flight crews, such as distance travelled, average speed and fuel economy. Many military pilots still wear a Navitimer and 65 years after its debut, it has been in constant production longer than any other Swiss Made mechanical chronograph.

Today’s military pieces make superb everyday wristwatches. They often have hardened cases (such as those by Bremont), water-resistance of at least 100m, shock-resistant movements set in rubberised mounts or scratch-resistant sapphire crystals ‘secured against displacement by sudden drops in pressure’, to quote IWC’s description of its latest Pilot’s Watch, the MkXVIII, a 1940s revival. In other words, you can bash them about a bit and, bar the odd scuff, they won’t betray you.

A simple, legible watch with a steel case, a black dial and a textile strap has rarely been more fashionable than it is now. Prices of the original Dirty Dozen have, according to Mr Sutton, doubled in the past couple of years. Forty years after its closure, Vertex – one of the original 12 brands – was even re-launched in 2016 by the great-grandson of the company founder.

My good fortune is to be of a generation permitted to enjoy a military watch without needing to partner it with a beaten-up pair of army boots. I’ve no doubt my sergeant major would disapprove, but I can live with that.

Choosing between a traditional watch and a smartwatch used to be an either/or choice. But a new breed of timepiece

Country Life's luxury editor Hetty Chidwick picks out some of her favourite things of the moment.