Father's Day is coming up on June 20, and a little treat will always be a winner. Of course, a big treat is even better... Toby Keel and Martin Fone pick out some of their favourite Father's Day food gifts.

If you’re looking for something longer lasting than a full stomach and a hangover, don’t miss our ‘Best Father’s Day gifts‘ guide full of gadgets, jumpers and all sorts of other interesting bits. Fortnums make a glorious Father’s Day hamper that’s £25 more, but don’t necessarily plunge straight for that one. It contains cheese and cured meat — they’re always welcome, but the sort of thing that you might end up with in the shopping anyway. This True Gentleman’s hamper has some really unusual and special bits, including hickory smoked nuts and dark macadamia biscuits.
£125 from Fortnum & Mason

‘Pub in a box’ from Signature Brew

From an F&M hamper to something a little more earthy, the ‘pub in a box’ from Signature Brew will elicit smiles just as broad for a father who’s been bowled over by the recent craft beer trend — and who’s the type to relive his youth. The box contains eight beautifully packaged cans of beer — two each of the award-winning brewery’s Roadie, Backstage IPA, Studio Lager and (best of all) the Nightliner porter — plus a glass, crisps, nuts, pub quiz questions. There’s even a QR code to access the ‘jukebox’ — a Spotify playlist designed to complement each different beer.
£30 from Signature Brew

In quite the most brilliant piece of packaging we’ve seen in some years, this is a gin lover’s delight wrapped in a wonderful piece of 1950s-style Americana: a vintage ‘fridge’ containing eight different flavoured gins from the hugely experimental distillers at That Boutiquey Gin Company.

Flavours include strawberry and balsamic vinegar, smoked rosemary and spit-roasted pineapple, all at 46% ABV (caution needed when mixing, in other words). But by far the quirkiest in the collection is a gin that’s both literally and metaphorically out of this world. Moonshot Gin’s claim to fame is that all of its botanicals have been sent into the stratosphere at an altitude of at least 20 kilometres. Random, if not eccentric, as this criterion for botanical selection may seem, they are classic ingredients for a London Dry Gin, although including a piece of rock from a lunar meteorite is a bit out there. It was a well-balanced spirit, with a curiously sherbet texture.
£39.95 from Master of Malt

It’s a truth universally acknowledged — at least by dads — that no meal is complete without at least a couple of condiments on the side. This selection of goodies from Tracklements is a joy: two great mustards, fine pickle and piccalilli… and best of all, the very best chilli jam we’ve ever had from a jar.

Marks and Sparks have hit Father’s Day pretty hard this year, with a special edition Colin the Caterpillar, some sort of ludicrously huge chocolate bar they’ve called ‘The Big Daddy’, and ‘Beer Whips’, which seem to be Walnut Whips, without the walnut but with added beer.

Best of all, though, are their hampers, all available to order online for delivery. The £100 ‘Daddy of All Hampers’ is at the top of the tree, with cured meat, cheese, parfait and pork pie, along with a vey nice Côtes du Rhône and Southwold blonde beer to wash them down. What makes it feel really special, though, is the wooden crate it comes in: an absolutely splendid touch. The smaller ‘Cheers Dad’ collection also comes in a wooden box, and while the contents aren’t quite as eye-popping it’s also half the price. I mean, obviously your dad is well worth the extra £50, right? …… Right?
£30-100 from Marks and Spencer 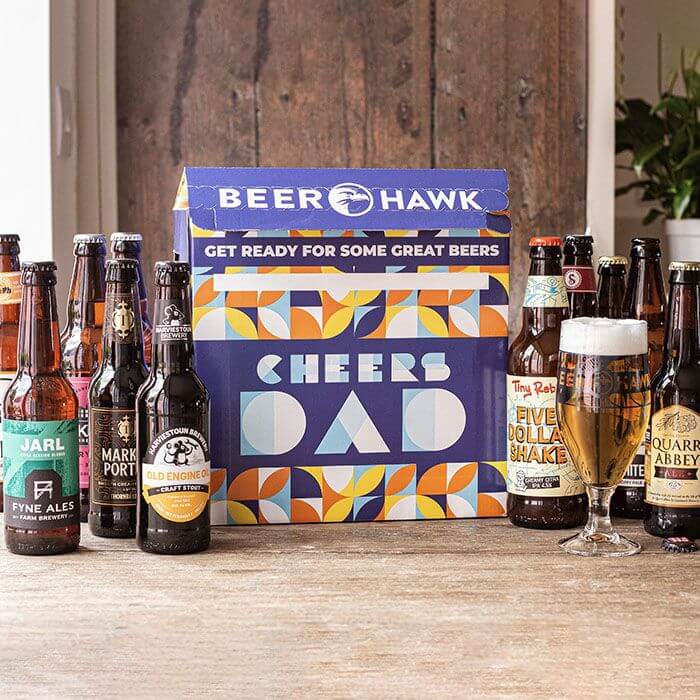 Alcohol delivery services thrived under lockdown, and in our experience Beer Hawk was up with the best of them — and they’ve put together a terrific real ale selection. Pick of the bunch is Old Engine Oil, a potent stout over 6.0% ABV, but there’s also a Benedictine-style ale, a delicious Market Porter and traditional ales from Cornwall, Yorkshire and more. It even comes with a glass, and in a box plastered with dad jokes. (Yes, it is your duty to pretend not to have heard them before.)

If a one-off box doesn’t sound quite right, the same company now run their own beer-by-post club called Beer Bods: every couple of months you get sent a box of eight beers from unusual breweries around the world. Clearly there’s nothing to stop you drinking them all at once, but subscribers are urged instead to join the weekly online tasting session, each Thursday night at 9pm, where they can crack open their beers and discuss them with other like-minded connoisseurs.

If your father is the type to seek a perfect post-prandial whisky liqueur — and one in an irresistible retro bottle — then Shanky’s Whip from Biggar and Leith may well become an odds-on favourite. From its vintage matchbox inspired artwork, featuring an Irish jockey, Shanky, completing the race in an ostrich-drawn cart, whip in hand, to its exquisite mix of Irish spirts and pot still whiskey, blended with vanilla and infused with caramel, it stands out from the field.

Black in colour, impressively smooth when served on the rocks, a heady mélange of vanilla and caramel in the mouth, creamy in texture, and without the afterburn you associate with a traditional Irish whiskey, it quickly made its way into my winner’s enclosure. And that’s even without having tried the suggested cocktail: one part Shanky’s, four parts Coca-Cola, and a slice of lime.
£23.95 from Master of Malt

The original Jaffa Cake gin caused a sensation when it first arrived a year or two ago — at least, it did in the Country Life offices. Since then the distillers, Zesty Spirits, have gone on to make vodka and rum equivalents, all of which are just as much fun as you’d expect — and all ideal for summery cocktails.
£14.99 from Master of Malt

There are many ways to show your Dad that you love and appreciate him. There's breakfast in bed, an offer