As the sun makes its usual sporadic and dismal efforts to warm Britain up as summer approaches, thoughts turn to the great question of the day: what to sip while sitting out in the sunshine. Whether your poison is wine, beer or something harder, we’ve a suggestion for you.

There are some people, few though they may be, who feel guilty having a full-strength G&T before five o’clock in the afternoon. For those people the drink of their summer will undoubtedly be Hedgepig’s Zesty Elderflower Gin Liqueur, a charmingly flavourful gin liqueur with a clean flavour smooth finish that’s drinkable with tonic, over ice, and does well with a slice of apple to garnish.

While less-conventional flavours of gin are popping up all over the shop, this one is delicate and scrumptious — and all-too-easily finished. The best part? As well as easing your conscience by having a G&T with gin that’s ‘only’ 29% alcohol, you’ll ease it further with the knowledge that for each bottle sold 50p is donated to the British Hedgehog Preservation Society. Obviously if the hedgehogs are your priority then you could always pick something up from Aldi and send the (considerable) difference to the charity, but, well, every bit helps.
Hedgepig’s Zesty Elderflower Gin Liqueur – £32 for 50cl from www.fruityhedgepig.com

We first tried Lowlander’s beers a few weeks ago and were heartily impressed, in particular by the Poorter — the spelling, like the company, is Dutch. Against that backdrop it was with some excitement that we popped the lid on one of their low-ish (2.5%) alcohol summery beers, namely the ginger and Kaffir lime wheat beer made with Darjeeling tea and cardamom. What a disappointment it was, for the first few sips. The next few were slightly more palatable. And after that it started to go down brilliantly, a wonderfully fragranced and balanced summer drink.

Note that distinction: drink, not beer. This — and the Yuzu and prink grapefruit flavour – are beers for people who don’t really drink beer. Go in with that knowledge and they’re delicious.
Lowlander beers, £2.49 a bottle from www.beerwulf.com

‘We all tend to get stuck in ruts,’ wrote Country Life’s wine columnist Harry Eyres in Wednesday’s edition of the magazine following a trip to a Shrewsbury wine merchant. ‘I was brought up on red Bordeaux and white Burgundy and still love them, but those staples of town and country taste only represent a fraction of what the wine world has to offer. There is clearly also life beyond Prosecco, Pinot Grigio and Sauvignon Blanc, so hats off to Tanners of Shrewsbury for unearthing some truly unusual and satisfying curios.’

Top of Harry’s list of something a little different is a Pinot Grigio which, he says, goes far beyond the ‘insipid, quasi-industrial kind churned out by too many Italian producers.’ This 2017 vintage from the Hunter Valley has what he describes as a ‘truly enticing floral, blossomy nose and a rose-tinged muskiness on the palate — it’s slightly off-dry, but not sweet.’ Perfect summer drinking fare, in other words.
House of Certain Views Pinot Grigio 2017 — £10.90 from www.tanners-wines.co.uk

Forget orange squash, and even lemon is not quite enough to get the full summer-hit you need if you’re mixing something a little special for those who can’t (or won’t, or don’t) want a boozy summer tipple. But this concoction from the classic English squash makers sounds ideal: a strawberry, cucumber and mint cordial.

Robinson’s suggest mixing it with sparkling apple juice, fresh lime and a sprig of mint — or even, if you can rustle up the energy, a strip of cucumber and a half strawberry, as pictured above. If this particular mix of flavours doesn’t inspire you, they also make pear & elderflower, crushed lime & mint and rhubarb, raspberry & orange blossom versions.Robinson’s fruit cordial — £2.50 for 500ml from supermarkets including Waitrose, Sainsbury’s and Tesco

Our classic recipes for home-made elderflower wine , cordial and bubbly are — though we say it ourselves — pretty much unbeatable. Obviously they taste better if you’ve foraged your own elderflower — the time to pick them is early in the morning on a hot dry day. But don’t do go picking if you don’t have the time: they must be used straight away for maximum effect.
How to make elderflower wine, cordial and champagne 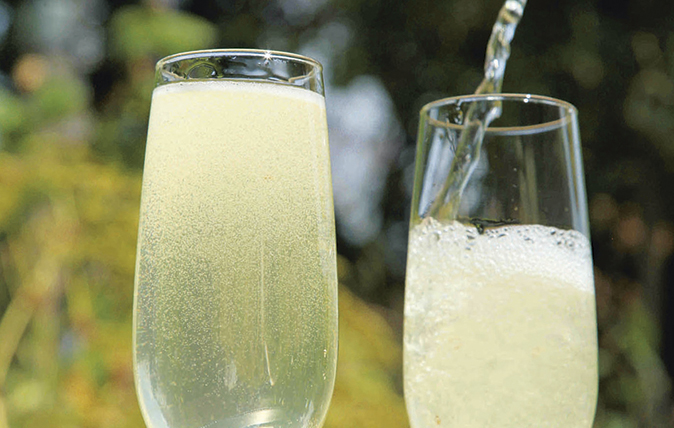