Steven Desmond takes a look at the garden tools we all need, and how to choose ones which will last you a lifetime.

The garden tools we use today have evolved are the modern descendants of implements that have gradually evolved over many centuries. In Elizabethan pictures, for example. gardeners are shown spades, shears and rakes which we would recognise today.

Every gardener should choose tools with patience and care, and view them as a lifetime’s investment. They should be your pride and joy, friends that never let you down over the years and strictly never to be lent to anyone else. No one can love them like you do.

The materials and techniques used to make these tools remain essentially traditional. Shafts and handles are still made of ash, the finest of all timbers for the purpose. Stainless steel has become the favourite metal for tool blades for obvious reasons, although it’s unsuitable for a high-quality propagation knife as it’s very difficult to sharpen.

Certainly, stainless steel makes that essential task of cleaning off tools after use infinitely easier. It also cuts cleanly through the soil and lasts a lot longer in stony soils.

Looking after your tools

Pushing the soil off the blades with a wooden wedge at the end of the day is all the maintenance that’s necessary. It isn’t a bad idea to remove varnish from the timber shafts of new tools and rub linseed oil in with a cloth.

An ancient implement, the spade is a manual plough for inverting the soil — 16th-century illustrations show it with its blade formed of wood and shod with iron. The modern spade has its blade of steel, subtly curved, perhaps with a shoulder to protect the sole of the thrusting boot.

It’s cunningly attached to a shaft of ash, with a handle in one of three forms according to taste: the simple T, the now old-fashioned D and my favourite, the Y, the end of the shaft riven and uniformly curved to fit the ends of the cross-piece. 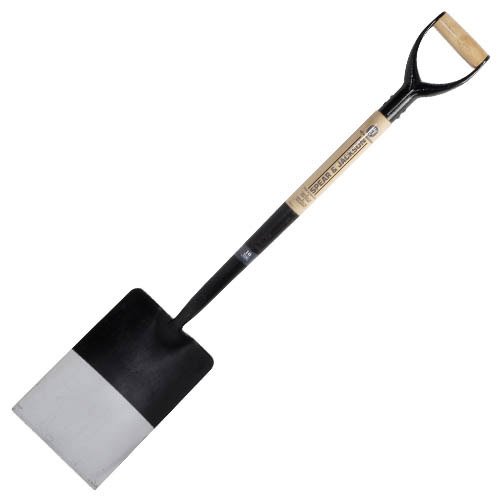 A manual harrow, the fork is intended to reduce the clods left by the spade to a finer tilth ready for planting. The tines, typically four, are again subtly curved, a desirable feature readily damaged by careless use. The back of the tines is an excellent tool for further reducing the size of clods. A light pricking-over of the soil (some call it firkling) provides a neat finish at the end of a planting job.

Variants include the potato fork, with broad, flat tines aimed at lifting tubers without harming them, and the gripe or muck-fork, ideal for shovelling autumn leaves into a barrow.

A simple enough tool in appearance, but skill in its use is necessary to produce the desired result. Once the tilth has been made finer by forking through, the rake comes into play, its long ash shaft held low against the soil to push the humps into the hollows and grade the soil uniformly fine for sowing seed, perhaps a new lawn. The landscape rake, with renewable teeth, is ideal for the task.

The spring-tined rake is great for removing fallen leaves as well as for that favourite turf task of scarification, removing astonishing piles of moss and doing wonders for the stomach muscles.

Perhaps the most useful tool of all, the Dutch hoe is constantly working away between the rows in the kitchen garden. Because its operation is shallow, it causes little damage to the roots. It’s the tool of choice for quiet summer evenings, moving slowly backwards along a row with the feet in the next. The seedlings can often be left to shrivel where they fall.

Some connoisseurs favour the alarmingly named swoe, whose blade can reach around the young plants into the row itself. Somewhere in the shed will hang a draw hoe, which some call the swan-neck, essential for earthing-up potatoes. 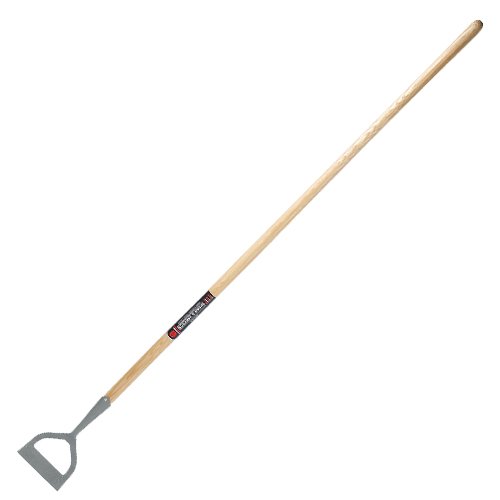 Found somewhere in every gardener’s bucket, the trowel is the tool of perpetual delight because we associate it with planting. Its component parts are very handy for setting out, with its overall length of a 1ft, blade of 6in and handle of 4in. The blade should be of steel and well rounded, as it’s intended to be pushed in vertically and pulled towards you, not to flick away the soil as if it were a teaspoon.

For those fiddling away in rock gardens and other crevice-like situations, the preferred variant is the fern trowel, with its firm but slender blade. 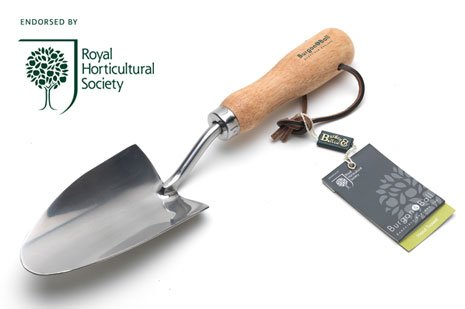 An item treasured by every serious gardener – I refer not to the handy tool for cutting string and whatnot, but to those specialist knives kept for each task. The curved blade of the pruning knife, an implement whose form dates back centuries, is little seen nowadays except in the hand of older professionals.

The straight-bladed knife, sharpened on one side only and kept so with oilstone and strop, is still used for propagation including cuttings, the budding of roses, and the delicate veneer-grafting of shrubs. Its blade of high-carbon steel will cut cleanly through plant tissue to make new plants.

Have been with us for centuries. These glorified scissors still have their uses in the age of the mechanical hedge-trimmer. Those with wavy steel blades get my vote. Running the blades under a tap when the day’s work is over, then spraying with light oil can readily remove the black build-up of gunge.

Secateurs have largely replaced the knife for pruning and come in many forms. Originally French, the best type for general use is that with bypass blades, which neatly slice without crushing.

I’ve had mine for 36 years now and, with a minimum of maintenance, they’re as good as new.

French revolutionaries thought the humble, but necessary, watering can so important they named a month (arrosoir) after it. Many handsome designs have graced our sheds over the years, including the impossibly handsome Versailles copper cans diligently collected by connoisseurs. The best types are made of galvanised steel and hang perfectly balanced in the hand, launching their elegant curve of water with delicious accuracy.

The addition of the rose, facing up or down according to circumstance, produces a convincing, if fleeting, localised rain shower, to avoid your delicate seedlings being flattened. The sound of the can being filled is a unique emblem of summer. 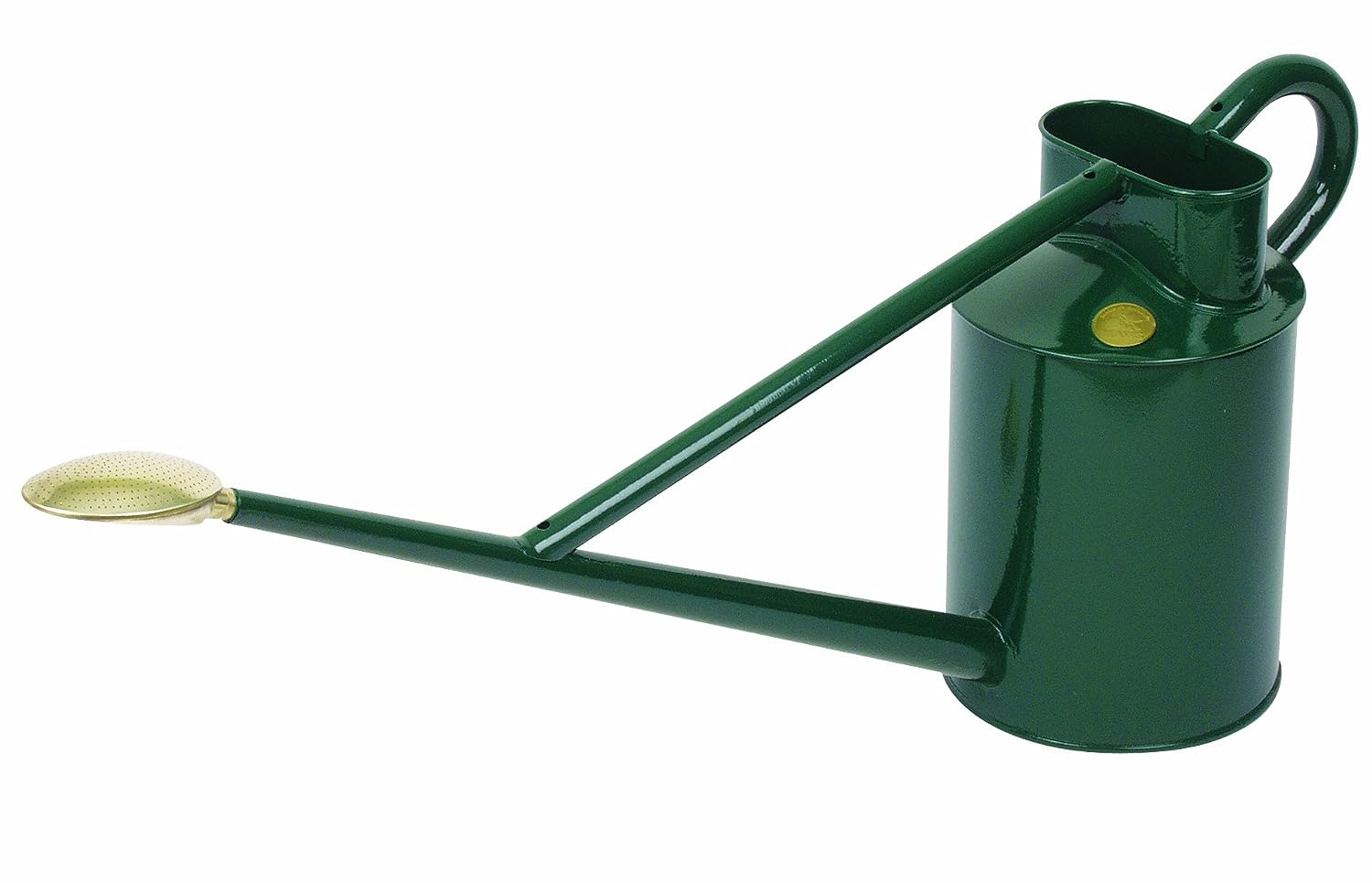 Another absolute necessity that has evolved gradually into its present familiar form, in the 18th century, the wheelbarrow had a flat bed on which the weeding gardener’s basket was placed, which, a century later was replaced by a curvaceous open box, with the whole barrow made of heavy, painted timber. A handy extra section could be placed on top to increase the capacity for autumn leaves.

It was a winter job in snowy spells to repaint the barrow in its shed, but, nowadays, metal is best. Some favour two wheels at the front, but soon go off the idea when they discover the loss of manoeuvrability. Classic designs last for good reasons.

Tools come in many shapes and sizes, all of them with a long pedigree. The half-moon edging iron is a most useful tool in expert hands, conferring instant order on overgrown edges. Long-handled edging shears complete the transformation. The turfing iron, a spade-like tool with a heavy steel blade shaped vaguely like a heart, is just the job for lifting small areas of turf.

The thickness of each piece is further refined by the combined use of the turf knife and box, ideal for winter repair of damaged edges. For those who insist on bowling-green quality, these are the craftsman’s choice.